A facelift is a very well known facial rejuvenation procedure that has its primary effects on the addressing loose skin and tissues in the neck and jawline. While there are a large number of iterations and varieties of described facelift techniques, they all require incisions around the ears to create their desired effects. While much focus on facelift surgery is on such manipulations as the SMAS or fat grafting, the management of the incision locations and their effect on the ear and the hairine are actually of equal importance.

While a debate can be made for whether the facelift incision goes into the ear (retrotragal) or in front of the ear (preauricular), it always goes around the earlobe on its way to behind the ear. One of the key elements of this incision pattern is to not have traction or a downward pulling effect on the earlobe with the raised skin flap to avoid postoperative earlobe distortion. (the so called pixie earlobe deformity)

But another  earlobe consideration before and during a facelift is its size. (vertical length) While facelift surgery will always create a temporary earlobe enlargement due to swelling, a good cradling technique of the skin flap underneath the earlobe from the facelift can also make it bigger. This can be an even be a more exaggerated effect when the earlobe is too large/long before surgery.

Elongated earlobes in women are common as they age due to the weight of ear rings and gravity. While the typical vertical ear length is around 60 to 65mm in women, the elongation of ear size comes from the earlobe with aging. When the earlobe makes up more than 1/3 of total ear size, it is judged as too long. 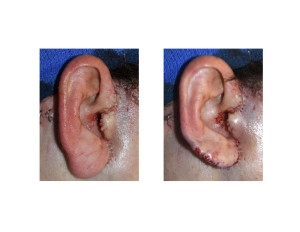 Earlobe reduction can be performed at the same time as a facelift. The best technique to do so is a helical rim reduction after the completion of a facelift. This allows maximal earlobe reduction to be done without comprising vascular perfusion to the earlobe or disrupting the incisional closure of the facelift incisions.