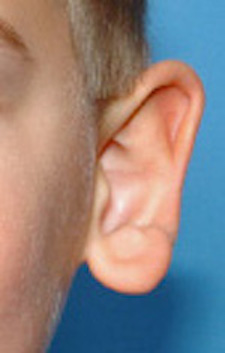 Correction of prominent ears by a setback otoplasty, whether in children or adults, is a highly rewarding procedure for most patients. Numerous techniques have been described in how to reliably and permanently setback the cartilage of the protruding ear. None of these technique have proven to be absolutely superior over the others, indicating that any of them when well done works satisfactorily.

One of the parts of the protruding ear that is less well discussed is management of the protruding earlobe. As the earlobe represents the lower end of the outer helical rim it often follows the same protrusion that the cartilage containing ear above it has. Setting back the cartilage of the ear does not, however, change the position of the earlobe below it. If anything it can even make the earlobe look more protrusive. Thus having a successful earlobe repositioning strategy is an important finishing step in many setback otoplasties.

In the  December 2020 issue of the Journal of Plastic, Reconstructive and Aesthetic Surgery, an article on this topic was published entitled ‘Prominent ear lobe correction during Pinnaplasty’. In this short paper the authors reinforce the concept that the non-cartilaginous earlobe can and should be adjusted during the primary ear reshaping surgery. They use an extension of the incision pattern on the back of the ear over the cartilages down onto the earlobe skin on its backside. The earlobe is setback by skin excision. One long skin closure is then done on the back of the ear.

There have been several techniques to reposition the prominent ear lobe. Different geometric patterns of posterior earlobe skin excision have been described including wedges,  W patterns, Y to V incisions, fishtail excisions to fillet techniques. It is clear that all of these techniques are effective and the most important concept is to recognize that in some setback otoplasties the earlobe is or will be protrusive and to make sure it is addressed.