The nose can have many shapes and they are most commonly perceived from a static standpoint. Since the nose is usually thought of as having a stable shape, it is not often seen as having a change in shape with dynamic facial motion. But the smiling deformity of the nose is well known with the tip of the nose being pulled down with facial motion, particularly smiling or laughing, due to contraction of the depressor septi muscle. 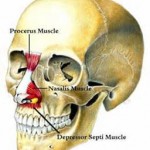 The depressor septi muscle is a small paired pyramidal-shaped muscle that originates from the incisive fossa of the maxilla and inserts into the nasal septum and the underside of the alar cartilages. When it contracts the tip of the nose is pulled downward. It is an antagonist muscle to other nose elevator muscles. In some people the action of the depressor septi muscle is very strong and the tip of the nose is pulled down noticeably when they smile. This is a well recognized phenomenon in rhinoplasty and the muscle is often released as the nose is reshaped.

Some patients report that while treatment of the smiling deformity or drooping tip by depressor septi muscle resection is effective, it can cause an undesireable upper lip lengthening effect. Contrary to these reports, this descriptive study reports a small but variable effect on upper lip length at rest.