Effectiveness of AntiBruising Effects of Arnica Montana in Plastic Surgery

Almost every procedure done in facial plastic surgery causes some temporary swelling and bruising. Bruising in the face is hard to hide and is a telltale sign of having had surgery and can take weeks to completely resolve in some cases. Therefore anything that can be done before surgery to help lessen the amount of facial bruising or to expedite its resolution is valuable. Besides stopping aspirin or any drug that makes the blood vessels friable before surgery, Arnica is the one accepted preoperative ‘medication’ that is used and is strongly believed to help with bruising.

Arnica Montana, also known as leopard’s bane, is a herbal perennial of the family Asteraceae which is indigenous in Europe. Made from a yellow daisy-like flower, the active components of Arnica include sesquiterpene lactones and flavonoids which are known to reduce inflammation and ease pain. It also contains thymol, an essential oil that fights infection and carotenoid an antioxidant. It has been used for centuries as a remedy for a diverse number of ailments. But it is most commonly used today in traumatic injuries to reduce inflammation and for its antiecchymotic effects. It is a homeopathic therapy and its antiecchymotic effects are presumably because it contains helenalin which is toxic in high doses (causes severe gastroenteritis and internal bleeding) but therapeutic when taken in very small doses. (the basic premise of homeopathy, ‘like cures like’)

While it is used regularly in plastic surgery, there are few studies that have substantiated its effectiveness to justify widespread use. There are a wide variety of potencies and purities of Arnica Montana that are available and that makes it hard to study due to inconsistencies in dosing. But there is one homeopathic formulation that is standardized that makes it available to be studied. (SinEcch, Alpine Pharmaceuticals)

Using SinEcch a prospective randomized double-blind placebo-controlled study was done to assess its effectiveness in the January 2006 issue of The Archives of Facial Plastic Surgery in a paper titled ‘Effect of Homeopathic Arnica Montana on Bruising in Facelifts’. Using 29 patients who underwent facelifts and were treated before and after the procedure with either Arnica Montana or a placebo, after surgery photographs were analyzed by a computer model for color changes as well as subjective assessments of the amount of after surgery bruising. Patients receiving Arnica Montana were found to have a smaller amount of bruising in the first ten days after surgery that was statistically significant. 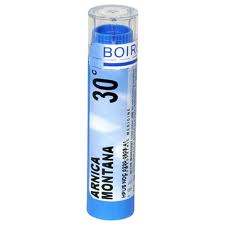 Despite this one well conducted study using a novel computer asssessment system, other studies have failed to show any reduction in bruising. But despite being equivocal in proven effectiveness, Arnica Montana remains widely used in plastic surgery. It does so for one reason…it is very economical and there are not adverse side effects with its use. The hope that it may have some reduction in bruising is enough to encourage its use. The question with its use is what dose? Arnica is obtained with either X or C designations. In homeopathy the number in the strength refers to the number of dilutions from the original tincture. The X and C refers to the parts of dilution either 1 to 10 (X designation) or 1 to 100.  (C designation) Arnica 30X has been diluted with alcohol or lactose 30 times. Arnica 30C is one part with 99 parts of the diluting base. In theory these are roughly similar in dose. Using Arnica 30X  patients should takes five pellets under the tongue three times a day. Arnica may be used in conjunction with other healing agents such as Vitamin C and bromelain if so desired.