Familial multiple lipomatosis (FML) is a well recognized but rare condition where the patient experiences the development of subcutaneous lipomas over their lifetime on their torso and extremities. Such patients will often develop hundreds of lipomas of all sizes throughout their lifetime of which some will necessitate removal due to their size and uncomfortability. Why these lipomas occur and what makes their genetic occurrence in those patients so affected is not known.

While familial multiple lipomatosis is started as rare, I have treated dozens of such patients over the years for removal of select large lipomas or for the removal of as many of them as is possible in a single surgical session. The concept of FML being rare is more from a population occurrence than what is drawn to a surgical specialist’s practice.

Excision is the only effective treatment for most lipomas regardless of their origin. While less incisional liposuction can break up some lipomas it is unable to fully extract such encapsulated masses and the risk of recurrence or incomplete removal is high. However, liposuction can be done in the FML patient just like any other patient who seeks generalized fat reduction even though it may not be for the lipomas specifically. 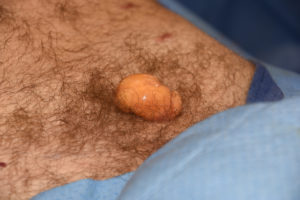 A unique aspect of performing abdominal liposuction in the FML patient is that it create the ‘reveal’ of any lipomas that currently exist in the subcutaneous tissues particularly if they are of any size. Since liposuction can not extract the lipomas but does take out the surrounding normal fat, the size of an existing lipomas may become more apparent or larger as the subcutaneous tissue layer becomes thinner.

With the increased exposure of existing lipomas from abdominal, flank and pubic liposuction, it may be necessary to concurrently perform open excision  to reduce their increased prominences. What once felt or looked like a smaller lipoma can instantly become a larger one which may bother the patient more if not removed.  FML patients, or any patients with known lipomas in the zone of liposuction, should be so advised of this possibility before surgery.