Eyebrows are the one piece of hirsuitic artistry that adorns the forehead. They separate the forehead from the eyelids and produce a partial frame for the entire orbital area. The desired  shape and size of the eyebrows has changed over the years. Pencil-thin eyebrows were once the way to go, requiring considerable maintenance with waxing and tweezing. While waxing and maintenance is still needed, fuller more bushy eyebrows are now in.

But for the woman who has naturally thin eyebrows or has lost a lot of eyebrows due to years of plucking, what is she to do? Applying topical Rogaine or Latisse is one option but that will only be effective if there are enough hair follicles to stimulate. It may make existing hairs longer and thicker which can help but will not repair lost follicles.

This is where hair transplantation comes in. Transplanting hairs to the eyebrows  has the obvious goal of adding follicular density but eyebrow restoration is so much more than just throwing hairs into the skin on top of the brow bone. The eyebrows are a unique patch of hair, small as it may be. The direction and angulation of the hairs must be precisely done to look natural and to grow in harmony with the eyebrow hairs that already exist. The shape of the eyebrow is gender-specific with women having  an arch to the outer aspect of the eyebrow while in men the eyebrow is flat with little to no arch.

Like the scalp, eyebrows use hairs harvested from the scalp. Up to 500 hairs may be needed for both eyebrows and this requires a scalp donor strip of at least 1 x 4 cms if not longer. Such smaller donor strips has the luxury of trying to find a patch of hair that is not gray (or likely to go gray), has a curl to it that matches as close as possible the existing angulation of the eyebrow hair growth and is not thicker than an eyebrow hair. (thinner is better)

When placing grafts into the eyebrows, the most important aspect is their placement. The eyebrow have a fanning effect from the inner aspect of the brow out to the tail. In the most inner aspect, the hairs point directly upward but then start to turn quickly into a more horizontal orientation. At the tail of the brow, the hairs may actually be less than horizontal and turn downward. Besides the angulation, eyebrow hairs lay almost flat against the surface of the skin and don’t stick up like those on the scalp. 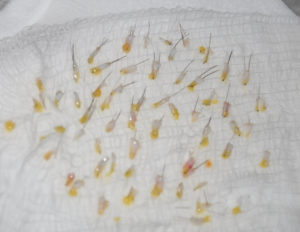 While hair transplantation to the eyebrows seems like one is transplanting hairs, the reality is that follicles (hair bulbs) are being transplanted. The attached hair (which is dead) is just the handle to carry and insert the follicles. This is why it is important after the procedure to not touch or manipulate the eyebrows. Let the eyebrows dry out and form a crust, that will help stabilize the follicles so they take better. The crust will come off after  a week and the visible hairs will fall out weeks later. This does not matter as what counts is the implanted follicles. It is expected to lose all the transplanted hair shafts which naturally shed from the trauma of the procedure. It will take up to six months to see regrowth and the results of the procedure.

The success of eyebrow transplants, as defined by graft survival, is somewhere between 50% to 75%. This is why a second touch-up may be needed within the first year of the procedure. Scalp hairs will grow much faster than natural eyebrow hairs so regular trimming will be needed. While this involves a little time, that is more than made up by avoiding the much greater time needed in applying eyebrow liner.