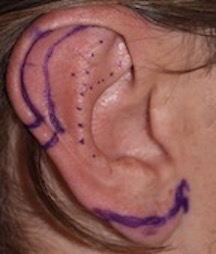 The ears appears in the midface section because that is where they lie horizontally in alignment to the face. 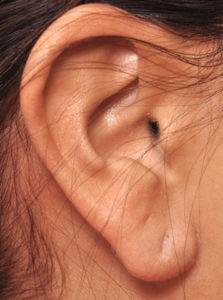 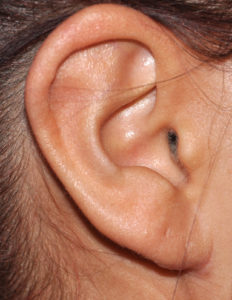 Large earlobes are often tolerated on men but are less attractive and proportionate in women. While cis-women often develop elongation of the only non-cartilaginous portion of the ear from ear ring wear and aging, a male to female patient may have them from natural development. Either way there are two techniques for earlobe reduction that are very effective and have well hidden scars. The technique not to use is the classic wedge reduction through the middle of the earlobe where a resultant fine line scar ends up on its anterior surface. Depending upon the natural attachment of the earlobe to the side of the face (attached vs unattached) reduction can be done using an inferior helical rim excision (unattached earlobe) or wedge excision at the attachment of the earlobe the face. (attached earlobe) 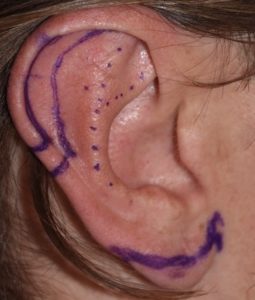 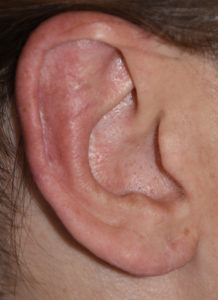 The female ear is typically smaller in size/height than that of men. In some patients a large ear may be to just enlargement of the lower earlobe which can be reduced as previously discussed. But when the ear is large due to being vertically long in height, which may or may not be associated with a large earlobe in the lower third, the typical cause is an enlarged upper third. This is from an enlarged scaphal cartilage segment. Vertical ear reduction or macrotia reduction surgery is done by removal of outer skin and cartilage from the scapha and a designated section of helical rim cartilage and skin. This allows a downward rotation of a helical rim flap. This lowers the height of the upper third of the ear and keeps the scar line inside the helical rim…with the exception of a very small fine line across the mid portion of the helical rim. Int many cases of large ears the earlobe is also reduced with an inferior helical rim excision. Using  this ‘high and low’ approach creates a visible reduction in the size of the ear. Vertical ear reductions are typically in the range of 10 to15mms.