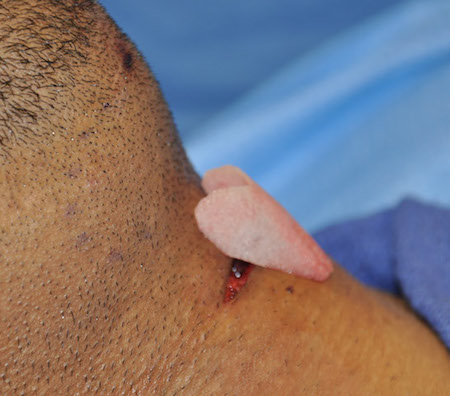 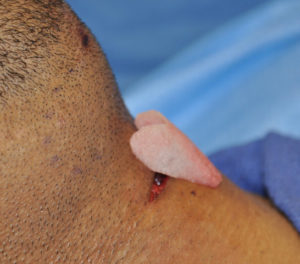 A prominent Adam’s apple or thyroid cartilage creates a central neck bulge that is a distinctively male trait. Its reduction, of course, is the one of the most well known facial feminization procedures. Conversely the trachea can be augmented in the FMS patient by a special implant designed to create a more prominent v-shaped thyroid notch prominence. The tracheal augmentation implant is placed through a small overlying skin incision identical to that used in a tracheal shave procedure. The implant is placed on top of the existing thyroid cartilage and secured with sutures. It is made of a material that permits tissue ingrowth that adds to its assured long-term positional stability.

To help make for a more visible chin and/or jawline, defatting of the fat beneath them may have an additive effect. This can be done either by liposuction or with central platysma muscle tightening as well. (submentoplasty) A submentoplasty is a graduated procedure over liposuction which is often overlooked in neck reshaping. By adding muscle tightening (and submuscular defatting) with liposuction the greatest improvement in the cervicomental angle can be obtained.