Scar revision is an important technique and part of plastic surgery. Many traumatic and sometimes surgical scars do not heal as desired and may benefit from a scar revision procedure. While much ado is made of laser resurfacing of scars for improvement, the reality is that many poorly formed scars will benefit by actual excision and not just superficial laser treatments.

In performing surgical scar revision, there are numerous basic concepts that are used to result in an improved appearance. One of these is the interruption of a straight scar line into a non-linear closure. The most historic method to do is that of a Z-plasty. A Z-plasty scar revision breaks up a straight line scar into a Z pattern. This is most commonly used to break up a scar that has a contracture component of it, crosses a joint line or runs perpendicular to the relaxed skin tension line.

In the April 2016 edition of the JAMA Facial Plastic Surgery journal, an article entitled ‘Perceptions of Aesthetic Outcome of Linear vs Multiple Z-plasty Scars in a National Survey’ was published. In this study the perception of the cosmetic appearance of linear scars vs zigzag scars by the general public. A computer-generated image of a mature scar was created in both straight line and a Z configuration and overlaid on photographs of Caucasian faces. Side-by-side comparisons were on an Internet-based survey to be rated on a10 point assessment scale. (1 = best appearance, 10 = worst appearance) 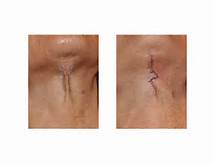 While this study is interesting, it needs to be out into clinical context. A Z-plasty is the least commonly performed non-linear scar revision that I perform. Most facial scar revisions are done using a broken line or irregular closure pattern. By contrast a Z-plasty often creates a a more pronounced change in the scar line that I often find aesthetically objectionable. A Z-plasty has its role in scar revision but should be used in very specific scar problems such as obvious contracture problems or scar deformities around moving facial structures such as the mouth or eyes.