While there are numerous body areas that can be changed through excisional lifts, particularly after large amounts of weight loss, the most common area treated is that of the waistline. Tummy tucks and body lifts (circumferential lipectomy) make up the most well known and largest surface area removal procedures. Often overlooked (but ultimately not by that of the patient) is the smaller pubic region which lies just below the waistline and may often be hidden by overlying abdominal tissues. 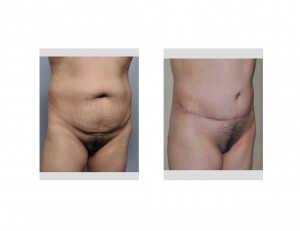 The mons pubis is  a skin and fat mound that is located directly above a woman’s pubic bone. This pad of tissue is thought to provide protection of the underlying bones during intercourse. With a predominantly fat composed mound, it is easy to see how it could act as a cushion. But with weight gain (and loss) the fatty pubic mound can sag and remain full of fat that can have a contour that becomes protrusive when what lies above it becomes flattened. It has been well described by patients of how a prominent mons pubis has become ‘unmasked’ by tummy tuck surgery. With a tight and flat horizontal scar line above it, the rounder and more convex pubic mound can stick out further than a flat stomach after tummy tuck surgery.  It is thus well known amongst plastic surgeons to check carefully for the pubic mound contour and incorporate it into the excisional design of the tummy tuck surgery

In the November 2014 issue of the Annals of Plastic Surgery journal, an article appeared entitled ‘Using Superficial Fascial System Suspension for the Management of the Mons Pubis After Massive Weight Loss’. In this paper, fifty (50) patients who underwent a lower body lift had a simultaneous mons pubic lift using a superficial fascial suspension technique. After an average follow-up of nearly 18 months, they were evaluated by before and after pictures as well as a satisfaction survey. Satisfaction of their mons pubic appearance improved significantly. One-third of the patients described the look of their pubic region as very good while half of them described it as good. Eight patients developed prolonged swelling of  the mons pubis and a single patient developed an infected fascia suture which had to be removed.

In the extreme weight loss patient, an unshapely pubic mound always exists even in men. But unlike the fat and more convex mound shape in a more traditional tummy tuck patient, the weight loss patient’s pubic mound is deflated and has substantial skin sag. Thus a significant pubis lift is needed with their tummy tuck/lower body lift and fascial suspension along with skin excision is a logical and stable approach to doing it.