In augmentation rhinoplasty of significance, the choice is always between using a rib graft vs an implant. Each options has their own specific advantages and disadvantages. The benefits of using an implant are avoiding a donor site harvest, less operative time, and an assured straightness to the shape of the implant. But like all implants used anywhere in the body, there is always a risk of inflammation reactions/infections with their use. 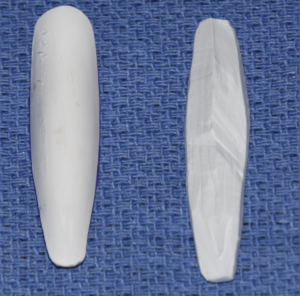 Historically nasal implants were solid silicone but issues with lack of tissue adherence has them associated with a significant incidence of malposition, overlying tissue thinning and infection rates. Such nasal implants have been improved by either layering ePTFE over a performed silicone implant (composite silicone-ePTFE) or carving a pure ePTFE nasal implant from a solid block of the material. Either approach creates tissue adherence to the surrounding nasal tissues through the microporous surface of the ePTFE. The composite implant offers a performed shape while the pure ePTFE implant must be hand carved.

While both the ePTFE composite and pure ePTFE nasal implant offer proven advantages over a traditional silicone implant, they are not complication free.

In the November 2019 issue of the Aesthetic Surgery Journal an article was published entitled ‘Onlay Fascial Grafts to Silicone-Polytetrafluorethylene Composite Implants in Augmentation Rhinoplasty: A Retrospective Study of 241 Cases’. In this clinical paper the authors review their experience using an I-shaped alloplastic composite dorsal nasal implant with an onlay temporal fascial graft in sixty-four (64) patients over a three year period. Their clinical outcomes were compared to a control group of one hundred and seventy-seven (177) patients who had the same nasal implant placed but did not have the fascial graft over a three year period that predated the fascial graft group. Complications between the two groups were compared focusing on malpositon/deviations and infections.

There was a notable difference in complication rates between the two groups with the implant-fascial graft group having a roughly 8% rate compared to nearly 15% in the implant only group. Erythemartous reactions and malpositions were less. Infections rates were similar at around 1% for each group.

The interesting question is why does adding a thin fascial graft decrease complication rates in ePTFE composite implants? Presumably adding such a graft between an implant and the overlying tissues in a thin subcutaneous tissue pocket improves tissue thickness. But the thinness of the fascial graft adds only a minimal tissue thickness so there must be a better biologic explanation. It would seem that having fascia adhere to the implant is better than having subcutaneous fat do so which may offer grater pocket stability. Although harvesting a fascial graft adds operating time to do so, it is not associated with any increase in complication rates.