Fat Injections in the Treatment Of Parry-Romberg Syndrome

Parry-Romberg syndrome, also known as progressive hemifacial atrophy is a very uncommon neurocutaneous disease. It is characterized by shrinkage of tissues (primarily fat although muscle bone and skin are affected as well) on one side of the face that usually follows the distribution of branches of the trigeminal nerve. It affects females more than males and often starts in childhood or early teens. Its cause is unknown although it is believed that it is autoimmune in nature similar to scleroderma.  The disease process eventually burns itself out with varying degrees of atrophic facial areas left behind. 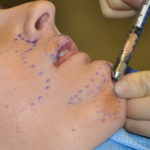 The only treatment for the sequelae of Parry-Romberg syndrome is fat injections to try and restore lost soft tissue volume. Other treatments can be used, from synthetic bone implants to free tissue transfers, but fat injections currently remain as the primary treatment for most atrophic facial areas. The interesting question, however, is how well do fat injections work in tissues that are so atrophic and may or may not have underegone disease cessation.

In the September 2014 issue of the Annals of Plastic Surgery, am article appeared entitled ‘Parry-Romberg Reconstruction – Beneficial Results Despite Poorer Fat Take‘ In this paper, a study reported on the effectiveness of fat injections for the treatment of Parry-Romberg syndrome, specifically looking at volume retention and skin changes in the treated areas. Fat graft take was assessed by 3D photogrammetry and skin changes were determined by spectrophotometry. All patients treated had multiple fat grafting procedures from 1.8 to 5.2 procedures based in the severity of their syndrome. Total volume of fat injected averaged 48ml per treatment session. They reported that Parry-Romberg patients had less fat take than unaffected patients that had been grafted. Skin color and texture had a three-fold improvement after fat grafting as determined by melanin index and patient assessment surveys.

This is the first paper that has provided some assessment of how well fat injections work in rebuilding atrophic facial areas affected by Parry-Romberg syndrome. Despite poorer fat graft take within the diseased tissues, fat grafting resulted in long-term improvement in facial contour and skin hyperpigmentation. It is no real surprise that fat survival is less in atrophic tissues and that multiple fat injection sessions are needed to obtain the best result. Skin quality improvement has been observed in many other damaged tissues (e.g., irradiation) so it is also no surprise that similar improvement would be seen in Parry-Romberg patients as well.

Fat injection and dermal-fat grafts have a significant role to play in the reconstruction of Parry-Romberg patients. As long as one has enough fat to harvest, fat injections should be considered even when the disease is active since it may have a benefit on disease progression with no side effects.