Aging affects every structure of the body and the hands are no exception. Age-related changes to the hands have been well described and includes thinning of the skin, brown spots and wrinkles and visible skeletonization with prominent veins, tendon and bone structures. Loss of fat volume is one of the key features in hand aging just as it is in the face. 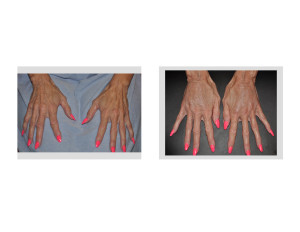 It is no surprise then re-voluminization of the dorsal side of the hand has become an established ant-aging strategy in hand rejuvenation. Fat is preferred over the use of injectable fillers due to its better volume retention and ultimately lower cost in the long run. It also has the potential benefits of providing improved skin tone and texture through dermal regeneration induced by blood vessel ingrowth and stem cell effects.

In the December 2015 issue of the journal Plastic and Reconstructive Surgery, an article entitled ‘Technical Refinements in Autologous Hand Rejuvenation’ appeared. In this paper the authors describe their technique for fat injections into the dorsum or back of the hand. Fat is harvested from the inner thighs. Approximately 20 to 25mls of aspirated fat is required for each hand. A central injection point is used located between the 3rd and 4th metacarpal joints. Fat is injected in a radiating fashion in the subcutaneous plane using about 10 to 15mls in the distal two-thirds of the hand to augment the region dorsal to the hypothenar eminence. A second injection site is done from between the first and second metacarpals where an additional 10mls of fat is injected into the proximal one-third of the hand  to augment the region dorsal to the thenar eminence. They have experienced no complications such as infection or any problens with hand function or sensation.

Fat injections into the hands places the grafts into the dorsal superficial lamina, the upper fascial  where the fat normally resides. The fascia that contains the veins and nerves lies deep to this layer. The deepest fascial layer is where the tendons and bones reside. Placing fat into the hands is easy as placing it right under the skin keeps it in the upper fascial layer and avoids the visible veins which seems like they would be unavoidable. The use of blunt cannulas avoids any risk of vein puncture. The injected fat must be massaged around to avoid lumps and irregularities. Aggressive and persistent massage is the key to a smooth fat distribution. 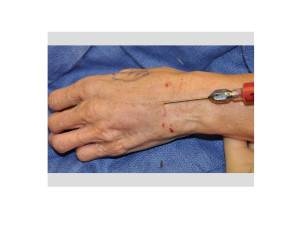 While the authors inject from the distal part of the hand (metacarpal joint areas), I prefer to inject from the proximal area at the wrist. Three injection site are used  and the fat is placed in a retrograde fashion. The ability to distribute the fat by massage throughout the upper fascia layer of the hand makes the location of injection irrelevant.

Total hand rejuvenation requires both an internal and an external approach. Fat grafting treats the intrinsic problem of aging by restoring/adding volume. But the external appearance of the hand should not be forgotten and treatments such as laser resurfacing and pulsed light therapy (BBL) should not be overlooked for optimal improvement in the appearance of the back of the hands.