Fat Injections for the Treatment of the Gummy Smile 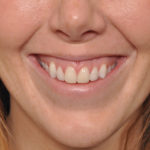 The gummy smile is a well known aesthetic upper lip issue in which excessive gingival tissue is exposed on smiling. There are numerous etiologies for its occurrence but treatments have largely looked at decreasing the excursion of the upper lip. Botox injections, maxillary lowering vestibuloplasties and levator myotomes have all been done with success although each method has its advantages and disadvantages.

Botox injections are effective albeit not permanent. A lowering vestibuloplasty also works although it is a surgical procedure that shortens the depth of the anterior maxillary vestibule. (not a significant disadvantage but one nonetheless)

In the August 2018 issue of the Aesthetic Surgery Journal, an article was published entitled ‘Micro-Autologous Fat Transplantation for Treating a Gummy Smile’. In this clinical paper the authors looked at the effectiveness of fat injections in reducing the gummy smile in seven patients over a two year period. Purified centrifuged fat was injected in small aliquots into the nasolabial groove, the ergotrid, and upper lip areas under intravenous sedation.

The average amount of fat injected was 16ccs between the two sides of the face. The decreased dental show at an average one year followup after the fat injection was roughly 5mm, 4.5mm, 4mm and 4.5mm as measured across the four upper front teeth.

Treating the gummy smile with fat injections is a novel approach to its treatment. Essentially the injected fat acts a physical block to the lip raising muscles. Having a sustained effect one year later as seen in this study is proof that the fat has survived the injection process.

While this appears to be a reliable and effective technique in treating the gummy smile, it also has some disadvantages not specifically discussed in this paper. Adding enough fat to block the lip elevating muscles will also have a paranasal augmentation effect. At 8ccs of volume per side this will be a noticeable facial effect.While this may be seen as aesthetically advantageous in the Asian patient due to their tendency for a midface skeletal deficiency, this may not be seen as desirable by other types of patients. Also if the fat injections should be desired to be removed, that is not easily done or even possible.