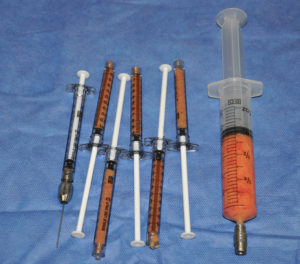 Fat injections have become the modern day equivalent in plastic surgery of the ‘magic bullet’. Like antibiotics over 75 years ago (although not quite that dramatic) fat injections have become widely used for a variety of problems in plastic surgery from treating radiation-damaged tissues to cosmetic augmentations of the face and body. Clinical successes are numerous although the exact reasons why remains speculative and many research studies have been done around the world to provide insight into this question.

The assumption has always been, and there is a lot of evidence to support it, that the stem cells in fat is the secret ingredient. Because it is an autologous treatment and not a synthetically derived drug, this has to its widespread use way before an understanding of how it works has been determined. Fat injections are largely harmless and, as a result, they have been applied to many difficult problems. Scars can certainly be difficult problems particularly recurrent scar formations and pathologic variations thereof. Injecting fat into scarred and contracted wounds has a lot of appeal and clinical successes are widely reported.

In the March 2018 issue of the Annals of Plastic Surgery an article was published entitled ‘Adipose-Derived Tissue in the Treatment of Dermal Fibrosis: Antifibrotic Effects of Adipose-Derived Stem Cells’. In this review paper the authors explore the current scientific understanding of how fat injections may improve hypertrophic scars and other fibrotic skin and subcutaneous issues through various antifibrotic mechanisms. As is commonly believed it is the stem cells, or more specifically stromal cell–derived factors, that exist within the fat which generate its therapeutic effects on difficult scar tissue probolems. Their mechanism of action is primarily done by paracrine signaling. This turns on numerous molecular pathways for an antifibrotic action by modulating the central profibrotic transforming growth factor ?/Smad pathway which normalizes the function of fibroblasts and keratinocytes in the involved area. Other mechanisms are undoubtably involved, some of which are yet to be discovered and studied. But stem cell conversion into new fibroblasts and even adipocytes is one commonly believed effect that results in less scar and softer tissue as well. 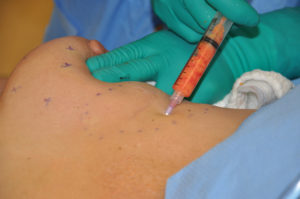 Despite its widespread use and substantial clinical evidence of its benefits, the actual mechanisms of fat injections on scarred tissues is far from well understood. While its clinical use has spurned much scientific investigations in the past decade, the need to understand why it works in many different clinical situations ensures that an equal if not greater number of research studies will be done in the future. Such studies will likely lead to a drug-like therapy that provides a controlled effect through dosing and perfected delivery mechanisms. Decades from now what is done with fat grafting and stem cells will make what we are doing today look fairly primitive.