Today’s plastic surgeon is awash, no pun intended, in a variety of topical and wound healing liquid and semi-liquid agents. Many of these are patient-derived and are extracts of either blood or fat. Stem cells are the most noteworthy of present but they are far from the first. One of the ‘oldest’ is that of fibrin glue. Dating back for over a decade, fibrin glues have been used for a variety of plastic surgery procedures most notably to decrease fluid collections (seromas, hematomas) or to attempt to expedite the aesthetics of recovery by minimizing postoperative bruising. Fibrin glues, however, have been around much longer than their use in plastic surgery and date back to the 1970s. 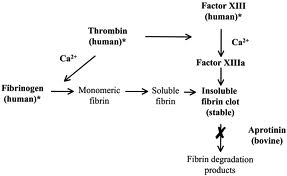 Fibrin glues are a two-component system which basically combines fibrinogen and a solution of thrombin and calcium. Together this creates the artificial equivalent of a blood clot outside of the circulatory system.  Some of the newer products contain an antifribrinogen component as well to prevent subsequent breakdown of the clot. The fibrinogen and thrombin proteins are often derived from human plasma from donor centers and must be purified and treated to inactivate viruses and prevent the risk of blood-transmitted infections. In the past, fibrin glues utilized processing of the patient’s blood which was both unwieldly and time consuming. Today’s fibrin glues are prepackaged and more convenient to use.

The greatest role of fibrin glues in elective aesthetic surgery is where large skin flaps are raised and drains are used to remove the build-up of fluids. This makes the facelift procedure one of the best uses for fibrin glue as all patients would want to avoid the use of a drain, even if they are only in place for a day or two after surgery. While its use in facelift surgery seems logical, clinical reports and papers in the past have not conclusively shown a major benefit with its use. In fact, fibrin glues have gotten a poor reputation due to complications with their use. Recent studies and clinical experiences have been more favorable.

A facelift study released in 2011 was that of a prospective phase III clinical trial using Baxter’s ARTISS fibrin sealant in 75 patients. What was most relevant about this study was that it was a split-face study design in which one side of the patient’s facelift closure was done with the fibrin sealant while the other was not. Total drainage volume was compared after 24 hours. The results showed that the side sealed by the fibrin glue swelled and bruised less and also had less discomfort.

The relevance of this study is that the use of fibrin glue in facelifts may be the avoidance of the use of drains. An important concept is that fibrin glue, just like drains, will not prevent a hematoma. Their value lies in reducing smaller fluid collections from internal tissue serum oozing. This helps the skin flaps to stick down better, including getting an earlier and better defined result of the underlying tissue contours. This is particularly useful in the jowl and jaw angle areas after a facelift where bruising and fluid collections are most likely to occur.

In a prepackaged form, a reasonable cost to use and better understanding of how to apply it, today’s fibrin glues may actually ‘stick’ around this time as a useful adjunct in facelift surgery.