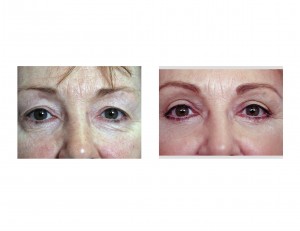 Eyelid lifts or tucks are one of the most successful and commonly performed of all the anti-aging or facial rejuvenation procedures. While the number of eyelids outnumber any other facial structure, the number of eyelid surgeries performed is also due to the early onset of bothersome and visible aging which takes its earliest effect on the eyelids with the deveopment of extra skin, herniated fat and wrinkles.

While cosmetic eyelid surgery is common, there are numerous aspects of it that are not know or frequently misunderstood. Here are five things about blepharoplasty you may not know.

The Formal Name for Eyelid Surgery is Blepharoplasty. Coming from the Greek words, Blepheron (eyelid) and Plassein (to form), reshaping surgery of the eyelids is formally known as a blepharoplasty. Many times the procedure is simply known as having a ‘bleph’.

Upper and Lower Blepharoplasty Surgery Is Very Different. Upper eyelid surgery is the ‘simpler’ form of blepharoplasty with lower risks. It is largely a skin removal surgery and there are no concerns about the support or suspension of the eyelid which is largely responsible for the blink reflex and eyelid closure. Conversely, lower eyelid surgery involves removing tissue and tightening a structure that is suspended across the eyeball and largely does not move but must remain tight up against the eyeball. Thus risks of lower blepharoplasty with skin and fat removal are disruption of the lid position (pulling away from the eyeball) and prevention of this potential problem must be factored into the surgical technique used.

Laser Blepharoplasty Is Not Better. Laser blepharoplasty is simply using a laser beam to cut the eyelid skin or remove orbital fat instead of a ‘cold steel’ scalpel. Because of its high tech nature and the magical properties that have been given to anything associated with a laser, it is assumed that a laser blepharoplasty heals faster and gives a better result with less scarring than traditionally performed eyelid surgery. The reality, however, is exactly the opposite. The burn injury sustained by the skin edges from a laser actually increases the risk of visible scarring and heals slower…at the least it does not offer a better result.

Non-Surgical Blepharoplasty Can Offer Some Improvements. There are a variety of non-surgical treatment options for the periorbital region. Botox injections, laser resurfacing, chemical peels, injectable fillers and fat injections can be used to lessen wrinkles around the eyes, improve its skin texture as well as volume enhancement. While effective, such treatments are not technically a true blepharoplasty and certainly don’t create the same effect. While calling these treatments non-surgical is certainly appropriate, it is also important to realize they are adjunctive treatments that can benefit a surgical blepharoplasty or can be used alone.