While the belly button or umbilicus is only scar tissue, it has a significant aesthetic impact on the appearance of the abdomen. The pleasing characteristics of the umbilicus have been well described with a sufficient inward depth, superior hooding and a slightly vertical almond shape. The belly button on women often end up astray from these shape characteristics primarily due to pregnancies. But there are numerous other events that can also distort its shape, many of them being of surgical origin (e.g., laparotomies) or birth defects (e.g., gastroschisis) In rare cases the entire belly button may even be lost.

Surgical reconstruction of the lost or deformed belly button, known as umbilicoplasty, has been described by numerous techniques. Most of them are some form of local skin flaps that are tacked back down to the abdominal fascia. The plethora of described umbilicoplasty methods indicates that none are ideal or can assure optimal results. 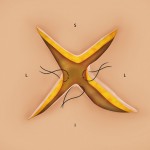 In the May 2015 of the Archives of Plastic Surgery, the paper entitled ‘Four Flaps Technique for Neoumbilicoplasty’ was published. The authors report their experience with umbilical reconstruction using a technique they call the “four flaps technique”. This is a method to make an umbilicus when none is present. This method uses the surrounding tissue by simply elevating four flaps to create sufficient depth and an aesthetically pleasing shape with some superior hooding. It leaves minimal scars inside the umbilicus with no external scars. It provides a method to create an umbilicus on a flat abdominal wall where there is complete absence of any remaining umbilical tissue. It has the advantages of being simple to perform and uses well vascularized skin flaps.

There are numerous methods for reshaping a deformed or distorted umbilicus but few methods for creating one from ‘scratch’ so to speak. I have seen a similar or nearly identical umbilicoplasty method described for a neoumbilicoplasty in a full tummy tuck where the original belly button stalk has been discarded. This four flap method provides the simplest and most assured method of creating an acceptable umbilicus.