While calf augmentation is common in Caucasians, calf reduction is common in Asians. The size of some female Asian calfs are disproportionately large with hypertrophy of the inner and outer heads of the gastrocnemius muscles. While calf liposuction may be successful in some cases, reduction in the size of the muscle is often necessary for a better aesthetic result. 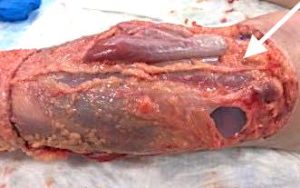 Selective neurectomies of the two heads of the gastrocnemius muscle has been developed to result in a gradual postoperative atrophy of muscle size. Numerous studies have shown that this is a safe and effective technique of muscle reduction that can result in an average of 3cms of circumferential calf reduction.

In the April issue of the Aesthetic Surgery Journal an article was published entitled ‘Simultaneous Use of Selective Neurectomy With Liposuction for Calf Reduction in Asians’. In this paper the authors reviewed their extensive experience combining selective neurectomy and liposuction for calf reduction. They provided a classification system based on circumferential measurements with less than 34 cms as mild, 34cm to 38cm as moderate and severe as defined as greater than 38 cms. The need for liposuction was determined a greater than 2 cm pinch test. Of all almost 200 treated patients, most were either classified as moderate (37%) or severe. (48%) At 8 months followup the average amount of reduction was 3.7cms in the mild group, 4 cms in the moderate group and 4.3 cms in the severe group. A very high satisfaction rate of almost 98% was reported. Of equal importance no complications of functional deficits of muscle function was seen.

In the popliteal fossa lies the motor branches of the tibial nerve which innervate the gastrocnemius and soleus muscles as well as medial rural cutaneous nerve. The spatial relationship of these nerves are variable which requires careful dissection and sequential dissection for intraoperative identification. Anatomic studies have shown that the origin of the nerve branches to the medial and lateral heads of the gastrocnemius muscle are located 15 to 20mms away from the midpoint of a line between the medial and lateral condyles of the femur. The nerve branch to the medial head is usually proximal to that of the lateral headband takes off from the posteromedial aspect of the tibial nerve while the nerve branch to the lateral head comes from the lateral aspect of the tibial nerve.

Selective neurectomies for calf muscle reduction are effective and safe. But patients needs to realize that it is a gradual process that takes up to six months after surgery to appreciate the final size reduction.