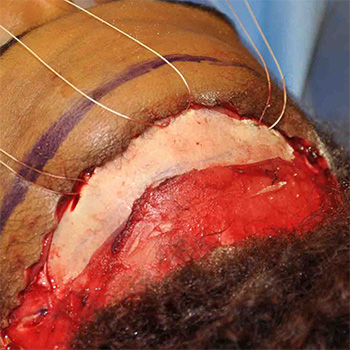 One determinant of a good facial appearance is balanced facial thirds. Ideally the face is divided into vertical thirds of which are equal in proportion. The upper third of the face is the forehead whose height is determined by the visible skin surface between the frontal hairline and the eyebrows. Given its open skin surface a vertically long forehead is easy to see and determine that it is aesthetically out of proportion. A recessed frontal hairline is the common culprit.

Hairline lowering by a large scalp advancement flap is as well known technique for vertical forehead shortening. How much the hairline can be advanced is largely dependent on the natural elasticity of the scalp and the degree of tissue undermining done. Given that the advanced skin flap will be under some tension, anchoring the frontal edge of the hair-bearing scalp to the bone is advised. This is a logical technique to prevent some relapse of the frontal hairline as well as potential scar widening. There is no standard technique described to do so.

In the January 2019 issue of Aesthetic Plastic Surgery an article was published entitled ‘Hairline Lowering Surgery With Bone Tunneling Suture Fixation: Effectiveness and Safety in 91 Patients’.  In this paper the authors describe their experience with a hairline lowering technique using bone tunnels. They have opted for this technique in the hope that it offers better results with fewer side effects than using an Endotine device. Over ninety (90) patients who had the procedure were retrospectively reviewed. Before and after pictures were used to measure the facial proportions as well as the actual length of the forehead at various times after surgery.

Most of their patients were female (89%) and young. (average age less than 30 years old) The mean forehead length before surgery averaged around 8 cms. The average hairline advancement distance was 18 mms +/- 2mms. One month after surgery the average forehead length was 6.5 cms. Such changes persisted at 1, 3, 6 and 12 months after surgery without an appreciable change in forehead length. No significant complications occurred such as infection or scar widening. 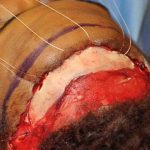 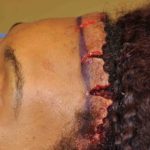 I almost always fixation at three points to fix the frontal edge of the hairline. I have never used the Endotine device to do so and thus can to comment on its effectiveness or any postoperative issues. I have always used three point suture fixation to the skull using bone tunnels attached to the overlying galea. It is hard to argue with the secure fixation obtained with minimal issues of suture knot palpability. Once the three points of suture fixation are obtained the redundant forehead skin can be trimmed and the skin closed without undue tension on it.

The making of bone tunnels into the skull understandably can make many surgeons apprehensive. Hence the more widespread use of the Endotine device. But the key is to angle the drill bit severely  on both sides so that the outer cortex skull layer is penetrated and not any deeper. Sometimes a perforating vein may be encountered and create some bleeding but this is quickly stopped by the application of bone wax. It is hard to argue with the degree of suture tightening that is obtained when the bone acts as the stable point to which the scalp is drawn.