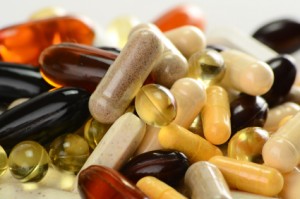 The use of dietary supplements is the norm today rather the exception. Between the use of vitamins and herbal supplements, it is estimated that nearly half of the U.S. population is partaking of these alternative or complementary oral aids. This does not take into account whatever pharmaceutical medications that they may also be ingesting. Put together it is not uncommon today to have a cosmetic surgery patient who is taking three, four or five oral medicines even though they have no major medical problems.

Without asking specifically on an intake form in a doctor’s office, some patients do not voluntarily report their supplement use. They may do so because they do not feel they are relevant to having surgery or do not want to admit that they take them. How prevalent is this patient behavior?

In the July 2013 issue of the journal Plastic and Reconstructive Surgery, an article was published on this topic entitled ‘The Incidence of Vitamin, Mineral, Herbal and Supplement Use in Facial Cosmetic Patients’. A retrospective review was done on 200 facial cosmetic surgery patients from a single plastic surgeon’s practice based herbal and nonherbal supplement use. They found that supplement use was nearly 50% amongst the studied patients of which 25% used only vitamins and minerals. In those using herbal supplements, they averaged using nearly three per patient. Herbal supplements were more likely to be used in women over the age of 50 while vitamin and mineral supplements were used by younger patients and men were more prone to take them.

Knowing whether a patient undergoing plastic surgery is using herbal medications is important as some of these supplements can increase intraoperative and after surgery risks. Herbal medications, such as echinacea, ephedra, ginkgo, ginger, St. John’s wort and valerian, have been identified as having adverse reactions such as immunosuppression, cardiovascular effects of hypertension and arrhythmias, hepatotoxicity, increased bleeding and interference or prolongation with various anesthetic agents.

It should not be any surprise that many cosmetic surgery patients have a higher incidence of oral supplement use given their attention to face and body image improvements. Patients should be aware that they need to stop these supplement uses at least 2 and preferably three weeks before their surgery. This is the known time that any potential adverse effects of these supplements should pass as their residues and breakdown byproducts are excreted from the body. Such recommendations are completely in line with that of the American Society of Anesthesiologists. If in doubt as to whether any alternative medication use may interfere with your upcoming plastic surgery, stop it as a few weeks of not being on them will have no adverse health effects.