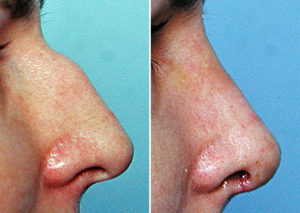 A bump or hump on the nose is one of the most common reasons one seeks a rhinoplasty procedure. Reducing a hump and having a smoother bridge of the nose makes it appear more pleasing. Even if many other features of the nose are being changed , one of the signs of a successful rhinoplasty is a pleasing dorsal profile of the nose.

If a patient only needs a hump to be taken down for their rhinoplasty, I will do it through what is known as a closed approach. (incisions on the inside of the nose only) Most rhinoplasties, however, involve hump and other changes as well so an open approach with degloving of the nasal skin provides a much better view and more predictable results.

Breaking of the nasal bones is often a part of hump reduction but frequently not understood. When large humps of the nose are taken down, removal of that hump or ‘roofline’ (bone and cartilage) leaves a flat and open bridge area. The nasal bones are no longer attached to the apex of the roofline but are standing ‘open’. This is one reason why the nasal bones are broken (nasal osteotomies) so that they will fall back in towards the center, recreating the roofline and making the bridge of the nose smooth and more rounded. This may also make the upper part of the nose more narrow which is often desireable.

Small hump reductions do not require breaking the bones of the nose, but larger hump reductions almost always do. That is why some patients will get black and blue under the eyes after rhinoplasty while others do not.

The trend today, not only for aesthetic reasons but to preserve good breathing through the nose, is to keep a high dorsal nasal profile. Taking down the bridge of the nose too much, as was commonly done in the past with ‘scooped out’ or ‘ski-jump’ noses, is not acceptable today as it leads to breathing problems. Keep a high but smooth dorsal line helps not only to protect breathing through the nose but to prevent further collapse (known as a saddle nose deformity) later in life.