The desire to correct an aging facial appearance has been around as along as there is recorded history. Facelift surgery in various forms has been employed now for over one hundred years. Today’s facelift techniques are very diverse and use manipulations of all tissue levels down to the bone to achieve often dramatic improvements. Younger patients with very early signs of aging enjoy the benefits of facelifting albeit with more limited procedures geared towards the need for less dramatic changes.

But no matter how it is done, a facelift procedure is invasive and many patients want to avoid surgery if at all possible. Some patients are so opposed to surgery that they will choose any procedure  that simply isn’t surgery. With the widespread and growing use of injectable fillers and promising autologous therapies like platelet-rich plasma (PRP) and stem cells, newer methods of ‘non-surgical facelifts’ have emerged. Some of these have very catchy names and good marketing efforts behind them, which combined with the ability to do them outside of a traditional operating room setting, has caught the attention and imagination of people concerned about their aging facial appearance.

The basic concept of all of these techniques is that they are injectable. While the name ‘facelift’ has become attached them, this is not an accurate name for them. They do not achieve the same effect as a facelift nor should they be construed as having much other similarity to a facelift either. Their use of the facelift name is a marketing manuever. The only similarity between a true facelift and these injection techniques is that they treat the same problem…facial aging concerns. Therefore, the proper name for them should be Injectable Facial Rejuvenation (IFR) which signifies their non-surgical nature They may provide some degree of rejuvenation but they definitely don’t lift tissues in the conventional sense.

In reviewing the available options for Injectable Facial Rejuvenation, it is important to recognize that most of them are not standardized treatment methods and are not sanctioned by the FDA to be used in this fashion. Because these techniques have emerged largely from marketing and patient recruitment means, and not from scientific or clinical studies, there is no way to compare their effectiveness other than anectodal reports and patient testimonials. This is why how one practitioner performs one injectable technique may be different than another. Such provider variability makes it impossible to assess the effectiveness of one IFR method, let alone if one IFR method is more effective than another.

The Liquid Facelift uses either one or a variety of off-the-shelf FDA-approved injectable fillers. These could include any of the many hyaluronic-acid based fillers, such as Restylane or Juvederm, or the particulated fillers such as Sculptra or Radiesse. The concept is the select placement of them into volume-deficient or sagging facial areas that expands them, thus creating some degree of a lifting effect. This is more expansion than a lifting result. Its effects will subside as the filler absorbs. It is postulated but not proven that these fillers have a long-term collagen stimulatory effect. 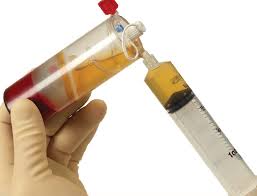 The Vampire Facelift is the ultimate marketer in IFR because it is a company that sells its technique for use. Its foundation is the use of platelet-rich plasma (PRP), an autologous platelet concentrate extract which contains growth factors and cytokines. Such factors have proven laboratory performance of accelerated healing. When introduced under the skin, it is presumed that it may have some rejuvenative or stimulatory properties. This technique is also combined with injectable fillers. The theory is that the PRP and the fillers in combination may lead to an enhanced and sustained collagen response. Whether this is enough to wake up the living dead is speculative.

The Stem Cell Facelift primarily employs the injection of fat or allegedly concentrated extracts of stem cells. Stem cells have caught the imagination of the cosmetic surgery world with the belief that they will provide some rejuvenative effect. This concept is theoretically appealing but has little scientific proof that this really occurs. Most ‘stem cell extracts’ are just concentrated fat from liposuction harvests. As such, it is impossible to know how many stem cells and what their potential is in any fat concentrate. Because of the widespread uncertainty of the value and effectiveness of stem cells, the American Society of Plastic Surgeons has issued a position statement that any of its members promoting or marketing stem cell techniques as unethical behavior. In addition, the FDA has recently issued a ban on any company that grows patient stem cells for treatment. All stem cell therapies, even using the patient’s own stem cells, must be done under a clinical study protocol. This does not exclude the common use of fat injections in which stem cells exist amongst the fat cells and are incidentally injected. But promoting it as a stem cell procedure is not viewed favorably.

The Acupuncture Facelift employs the traditional Chinese technique of the introduction of needles to free up chi or energy. Allegedly, introducing needles into the face causes the production of collagen and elastin to plump up the skin. After a series of 10 treatments, wrinkles and deeper lines are purportedly reduced and skin is lifted. More likely, some mild swelling occurs as a result of the needles and results in some slight temporary skin fullness but no documented and proven lifting effect that is sustained as ever been studied or proven. This limited injection or needle approach to facial rejuvenation is the greatest stretch in calling it a facelift technique.

Injectable Facial Rejuvenation has a role to play in treating facial aging concerns but should be understood in proper context. They are not facelifts and will not lift up sagging facial tissues. They are principally plumpers or volumizers and achieve any wrinkle or fold reduction through this effect.