The jaw is the largest bone of the face and completely accounts for the shape of the lower face.  It provides a sharp line of demarcation from the neck and the rest of the face. It can be weak or strong or well outlined and distinct. No matter how it is shaped, it creates a definite impression of how one’s face looks. From an aesthetic surgery standpoint, the only historic point of interest of the jaw was that of the chin. Recent aesthetic interest has now cast the shape and prominence of the jaw angle of great significance also, particularly in men.

The jaw angle reflects the intersection of the posterior border of the mandibular ramus (vertical part of the jaw) and the horizontal body of the jaw. It can range anywhere from 60 to 90 degrees. The closer one is to 90 degrees the stronger the jaw prominence is perceived. But angulation alone does not solely contribute to the impression of a strong jaw angle. Angle width or flaring is equally important. The jaw angle width is somewhat related to the bone’s thickness and the degree of angulation. However, the closer one’s jaw angle is to 90 degrees the flare is not necessarily the greatest. The amount of jaw angle flare seems to be unique to each individual. 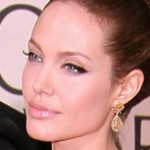 The aesthetic significance of a prominent jaw angle is historically unique to men. Men do frequently seek change in this part of the jaw through angle implants. But it has also become more of an aesthetic desire for some women. This is undoubtably motivated by the faces of such actresses as Angelina Jolie and Marcia Cross, for example, who have very distinct and prominent jaw angles. A more distinct female jaw angle helps create a more angular and defined face and is becoming increasingly popular. A much more prominent jawline may help convey a stronger personality or presence for a woman or it just may be it gives them a more dominant sexual presence.

Jaw angle implants must be carefully chosen for a woman. Incorrect sizing and style of the implants can easily make a woman look cartoonish and overdone. In general, they work better in women who have a naturally thin or average face. Angle implants in round or heavy faces will only make them look more heavy and full, not more distinct and angular. Most women do better by widening the angle and not dropping it down or squaring it off too much. (men’s angles almost always need to be lowered and made more square) A good jaw angle for most women should be less than 90 degrees and closer to 75 to 80 degrees.

Female jaw angle implants is often a primarily vertical augmentation. Length increases of 3mm to 7mms is more than adequate in most cases. Tapering the implant to a sharper edge  at the angle can be helpful. I am not so much concerned about the material choice of the implant but its size and shape is critical. Both silicone and porous polyethylene jaw angle implants can be effectively used.