The sagittal split mandibular ramus osteotomy (SSRO) is the most commonly performed osteotomy of the mandible. It is done to either move the lower jaw and its attached teeth either forward or back to correct dentoalveolar deformities and bring the teeth into a better interdigitating relationship. It is a very cleverly designed osteotomy that splits the ramus of the mandible in a sagittal dimension into inner and outer cortical halves. One of the most important maneuvers during its execution is to avoid injuring the inferior alveolar nerve that runs through the bone.

In looking at diagrams of the bone put back together and even early after surgery x-rays, there is a smooth inferior border between the proximal and distal segments. One of the key elements during surgery is to ensure there is good alignment along the inferior border in most cases. 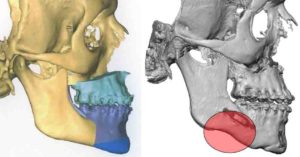 Despite this bony alignment during surgery it is not rare that long-term healing leads to notching along the once smooth inferior border. Thus undoubtably occurs due to some bone resorption from partial devascularization to the outer half of the bone. The outer bone segment has had the masseter muscle stripped off during the procedure, and in conjunction it being split away from its inner half, it has become partially like a free bone graft near the anterior vertical bone cut.

Such notching along the inferior border can be an insignificant issue or can cause  a visible external deformity. I have observed it numerous times in the creation of custom jawline implants and has often been a reason for the implant to recreate a visible and well defined jaw angle shape. Between creating better jaw angle shape and improving the notching the lies anterior to it, a custom implant design may be need in any cases.