Jaw angle implants have become more recently recognized as an essential part of jawline augmentation. While much focus has historically been on the front protruding part of the jaw through chin augmentation, it is now recognized that the chin represents just a part of the total lower facial effect.

While jaw angle implants have been around for several decades they have been limited to an implant style that only provides width to the ramus of the mandible. While this has a beneficial role in some patients, many jaw angle deficiencies are as much vertical if not more so than just width. Lengthening the jaw angle and creating a more obvious angularity to the back part of the lower jaw has some major aesthetic benefits.  This has been remedied today with more vertical lengthening jaw angle implants. Injectable fillers have also been used to create this effect with variable success. But it is an accepted ‘trial’ method for some patients to determine if such changes would be perceived as beneficial.

Comparing facial implants and injectable fillers is done using volumetric displacement. Based on the Archimedes principle of displacement, volume of displaced water would be equal to the volume of the implant. Using newer vertical lengthening jaw angle implants of its three available sizes, their weights in grams and volume displacement were as follows: 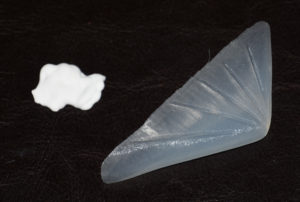 The volume displacement of all injectable fillers is on the syringe so the comparison to jaw angle implants can be directly done. It shows that a 1cc syringe of any of the hyaluronic acid-based fillers (e.g., Juvederm) would be equal to less than half of a small jaw angle implant. Larger jaw angle implants more directly compare to more than two to three 1.5cc syringes of Radiesse.

Volume alone, however, is not the complete story of any material’s external facial augmentation effect. Besides volume there is the issue of how well the material pushes on the overlying soft tissues to create their effect. This is known as G Prime Force or the elastic modulus. By feel it is obvious that implants are stiffer than any liquid material and would have a higher resistance to deformation. (thus creating more outward effect given a similar material volume) It is therefore probable that comparing volume displacements alone overestimates the effect of injectable fillers compared to implants.