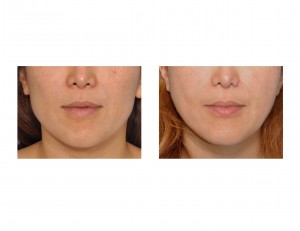 In the January 2016 advanced publication issue of the Annals of Plastic Surgery an article was published entitled ‘Reduction Gonioplasty: Bone Regeneration and Soft Tissue Response’. The goal of the published study was to evaluate the tissue responses of reduction gonioplasty and to determine what effects it had on the aesthetic outcome. The surgical technique used consisted of a high-speed rotary cutting bur from the new gonial point to the inferior mandibular rim under the second premolar. Then an elongated osteotomy line (mandibular-chin body osteotomy) was performed with a reciprocating saw. A total of almost fifty patients were treated and followed for up to one year. Bone regeneration in the burring ostectomy region and in the ostectomy region was usually less than 1mm. The soft tissue response followed the bone reduction fairly closely.

Bone regeneration occurs very minimally after jaw reduction. The little that does occur does not affect the final aesthetic outcome in terms of width reduction, The soft tissue response ratio is higher in the anterior mandible,and the outcome of reduction gonioplasty is a thinner lower face.

This paper is a bit mistitled since the procedure done and studied is actually closer to a v-line jaw reshaping (minus the chin) than an isolated jaw angle reduction. But the point remains the same in that whatever scar and small amount of bone regeneration that occurs after surgery does not affect the eventual aesthetic outcome.