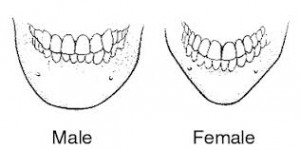 A square chin and jawline is considered desireable in a male but not so in a female. It is also deemed unattractive in certain ethnicities such as in the Asian face as well as in the male to female transgender face. Reduction of a square jawline is often perceived as that of the jaw angles. While jaw angle reduction surgery has a role to play in facial contouring, it only provides some narrowing in the posterior mandible or back part of the jaw. It has no slimming effect in the front part of the jawline in the chin area.

Narrowing of the chin or front part of the lower face can be done by several methods, all of which require bone reduction. If a chin osteotomy (osteoplastic genioplasty) is being done, the width of the chin will naturally narrow when the chin bone is brought forward and/or vertically lengthened. But not everyone needs horizontal or vertical chin lengthening so an osteotomy can be ineffective. The other approach is direct burring reduction of the chin or mandibular tubercles. By reducing the bony sides of the chin it can be narrowed in the frontal view.

When doing an osteotomy to create a chin narrowing effect, it is important to realize that the bone will not narrow behind the osteotomy cut. This also is where a step-off can be created at this junction which is most evident when horizontal advancements are done. As the bone edge of the downfractured chin segment moves forward, this step-off can be created. It can be a difficult area to reach for smoothing out this step-off and there is risk to the mental nerve which is very close by. This is why it is helpful to make that osteotomy cut back as far as possible to extend the natural narrowing effect of the advancing osteotomy and avoid a prominent step-off.

Reducing the sides of the chin can be done by either burring or saw reduction. Using a saw always removes more bone quickly with less risk of injury to the mental nerve. The more relevant question is whether it is done through an incision inside the mouth or from an external submental incision from below. Most of the time an intraoral approach is used if only the sides of the chin need to be reduced. But when an overall chin reduction is being done reducing height and/or projection, a submental approach is used so that the extra soft tissues can be managed by excision and redraping to prevent postoperative sagging or ptosis.

To achieve a more slim feminine lower face, reduction of the jawline must be considered as a whole. Changing the width of the chin from a more square to a tapered shape creates an essential change in the frontal view. Barring the need for horizontal or vertical lengthening of the chin, burring or saw reduction of the sides of the chin can be done from either an intraoral or submental approach.