The bridge or dorsum of the nose is one of the most frequently manipulated areas in rhinoplasty. Removing a nasal hump is the primary reason and most patient’s interpret this as ‘shaving down the bone’. But in reality the area of a hump, also known as the keystone, has a more complex anatomy. It is the junction where bone and cartilage meet in a unique triangular union. The nasal bones, septum, upper lateral cartilages and the perpendicular plate of the ethmoid all come together in this area. 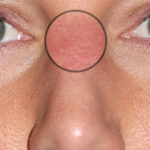 In the February 2018 issue of the journal Plastic and Reconstructive Surgery an article was published on this nasal anatomic area entitled ‘The Keystone: Consistency in Restoring the Aesthetic Dorsum in Rhinoplasty’.  In reviewing keystone nasal anatomy and its manipulations, key points are identification and prevention of the following deformities.

In nasal hump reduction as the roof of the triangular bony is removed the apex of the bony nasal dorsum widens. At the same time the width of the upper lateral cartilages to the septum remains the same, creating a width discrepancy to that of the bony vault. To maintain a smooth dorsum the width discrepancy between the two must be equalized. Failure to do so can create the inverted V deformity, which is the caudal edge of the nasal bones becoming visible through the nasal skin. Equalization of these widths can be done by narrowing the bony vault (osteotomies), widening the cartilaginous vault (spreader grafts) or both. If the width discrepancies between the two is not great, an upper lateral cartilage spanning sutures can be used.

Taking down a dorsal hump in rhinoplasty is often viewed a simple enbloc resection that is easily performed. But in reality carefully attention must be given to the width and heights the bony dorsum and the upper lateral cartilages to avoid keystone deformities.