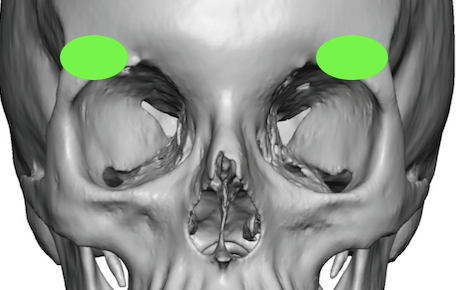 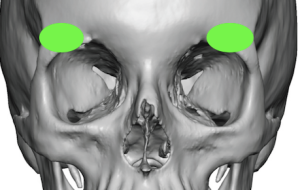 In the March 2022 issue of the Aesthetic Plastic Surgery journal an article on this topic was written ‘Aesthetic Enhancement of the Brow using Hydroxyapatite’. In this paper the authors report in a clinical series of two hundred and fifty (250) patients, mainly women, who had brow bone augmentation using hydroxyapatite granules (HA) over a 12 year period. Specifically the material was applied to the lateral brow area which is located between the supraorbital nerve foramen and the lateral bony temporal line. A subperiosteal pocket was made through a forehead crease incision and the material delivered by a syringe technique. The typical volume injected was in the range of 1ml per side. (0.5ml to over 2mls)

Projection of the lateral brow was increased in each case. A secondary revision of the HA injectate was necessary in 39 patients. (16%) More revisions were done for under correction (27) than over correction. (12) Otherwise no infections or other complications occurred. Resorption of the HA granules over time was not seen.

The use of HA granules for facial bone augmentation has a long history. The question has never been whether such HA granules were biocompatible, resulted in bone ingrowth or were volumetrically stable over time. It has always been an application issue in terms of achieving a smooth and non-irregular contour augmentation of adequate volume…which is not always assured when injecting a granular material whose particles are not uniform in size or shape.

While this clinical paper uses a brand stroke in describing the technique used, Brow Enhancement, it is actually a very discrete/limited type of brow bone augmentation. It specifically relates to a tail of the brow bone augmentation (temporal brow) and its use for more age-related changes. (soft tissue loss/sagging) As a result it is a low volume augmentation, is an ancillary procedure to other aesthetic periorbital surgeries, and is most commonly performed in women. The use of granular HA particles is effective for this brow application because it is done through a superior approach (where the subperiosteal pocket limits any risk of inferior granule migration) and it can be injected through a very discrete superiorly located forehead wrinkle incision. This type of injection should not be confused with that of synthetic fillers in which a needle is used percutaneously and the gelatinous material has a nice linear flow through small gauge needles. This is really an ‘open injection’ technique where the granules (like sand) use a syringe to be contained and are then pushed through an open ended syringe (no needle) to get them to the desired location in a controlled fashion. This is how HA granules have been used since their introduction back in the 1980s.

The use of HA granules can be an effective facial bone augmentation technique provided it fulfills three criteria; 1) it is a low volume augmentation need, 2) the subperiosteal pocket can be limited to prevent intra- or immediate postop granule migration and 3) a contained delivery mechanism is used. In this lateral brow bone augmentation paper all three such criteria are met.

The revision rate report in this paper is exactly what I would expect from an HA granule injection technique. Like any ‘loose’ material that is injected and, then its shape created by external digital manipulation, there is going to be some variability in the aesthetic result. It is far better to have a brow undercorrection as more can always be added later or the patient may just accept whatever improvement has been obtained. Brow over corrections or contour irregularities are more challenging to resolve as it is one thing to place a material through a small remote incision location but quite another to secondarily reduce/remodel where it is now located.

This paper has also done an aesthetic service to patients and surgeons alike. It has aptly pointed out an area of facial augmentation whose benefits are rarely perceived.