In Asians double eyelid surgery is extremely common. It is also frequently done in conjunction with medial epicanthoplasty to eliminate the webbing of skin across the inner aperture of the eye. (epicanthal fold) But because many Asian eyes have a short horizontal length from the inner to outer eye corners, extending out the lateral length of the corner of the eye through lateral canthoplasty procedures is also done.

Unlike the medial epicanthoplasty, which does not really touch the inner corner of the eye, efforts at lateral canthoplasty do. Thus they have a higher rate of potential complications that involve separation of lid contact with the eyeball. (e.g. lid margin eversion, webbing) These risks are increased when the horizontal eye length is very short or has a high upturned out corner of the eye. 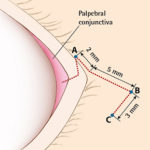 In the July 2016 issue of the Archives of Plastic Surgery, an article was published entitiled ‘Effective Lateral Canthal Lengthening with Triangular Rotation Flap’. In this paper, the authors describe a lateral canthal lengthening procedure that us both effective and has a very low rate of complications. In this technique a triangular flap 4mm or so away from the lateral canthus was incised and rotated 45 degrees laterally maintaining the continuity of the lower eyelid gray line. A new lateral canthus was created by suturing the rotation flap to the lateral orbital rim maintaining a triangular shape. The procedure was judged successful in 95% of the patients with visible lateral extension. The continuity of the gray line on the lower lid was maintained with a natural-looking triangular shape. The average amount of lateral extension was 3mms. Some minor complications did occur, such as wound dehiscence, webbing, and scarring, but these were stated to be easily corrected.which were easily corrected.

This lateral canthal lengthening technique uses a triangular flap that rotates 45 degrees out laterally to create its effect. Its simplicity avoids most complications and does not need to have a canthotomy to exhibit its effects.