Age-related changes around the mouth, known as perioral aging, are a very common concern for many women. Like the rest of the face, the mouth area deflates and sags with aging. One of the most effects of aging is that the upper lip sags, particularly at the corners, causing the mouth to sag. As the mouth corners turn down, the loose skin and tissue to the side of the mouth falls forward creating what is known as a marionette fold. The combination of both of these effects can create an inverted U-shape to the mouth, making it look aged as well as sad.

When considering rejuvenation methods, the mouth is like an island. It’s location is far away from the pull of any traditional method of skin lifting such as the lateral pull of a traditional facelift or the superior pull of a midface lift. While both of these procedures do provide some improvement to the sides of the mouth and marionettes folds, it is not as significant as most people think. Early recurrence is common because of the stretched out and thin skin that most b elderly have.

There are several changes that can help improve the appearance of the aging mouth. These would include fuller lips, a more horizontal orientation of the mouth corners (commissures), and softening or elimination of the marionette folds. Injectable fillers are a common method used for perioral rejuvenation. While they can make the lips more full and soften deep vertical lip lines, they will not improve the frowning or downturned look to the mouth.

Lifting of the mouth is best done by removing selected areas of skin. The most common mouth lifting procedure done is a corner of the mouth lift. (COML) By removing small triangles or heart-shaped segments of skin just above the commissures, the corners can be immediately and simply repositioned. Whether done in conjunction with a facelift in the operating room or as an isolated procedure done in the office under local anesthesia, it is very effective and leaves very discrete scars that I have not seen to be of any significant concerns. One important consideration when doing the procedure is to not let the length of the scar that trails away from the commissure get too long. 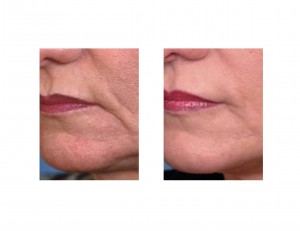 Marionette fold excision initially seems aggressive and there is justifiable concern about the scar. But in the elderly patient with thin and inelastic skin, the scar can be quite thin and heal inconspicuously. This is well known in elderly patients in extensive experience from facial skin cancer excision and closure. It can be performed after unsuccessful improvement or early recurrence after a facelift or done at the same time as a facelift. The length of the resultant marionette line scar will depend on how severe the fold is and whether it is done in conjunction with a facelift.

Rejuvenation of the aged and frowning mouth may benefit from excisional procedures. While one should usually try injectable fillers first, the age of the patient and the severity of the downturning may allow one to skip right to excision. COML and MFE, while creating some scar, can make improvements that are not achievable otherwise.