The Scars of Limited or Short Scar Facelifts 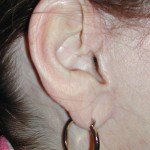 Facelift surgery, of any variety, always produces a nice aesthetic improvement of the neck and jowl areas. Different types of facelifts area available today, limited or full, based on the amount of neck and jowl sagging that is present as well as to how much recovery one wants to go through. The limited facelift, also known by many different terms such as the Lifestyle Lift, Quicklift and other branding names, has become popular today as younger patients seek early facial rejuvenation benefits.

All facelifts, of course,  require incisions and resultant scars to obtain the improved appearance. These scars are well known to be around the ears but many patients don’t have a clear idea as to exactly where…and what they will eventually look like. Seeing the final scars gives reassurance that they are not trading into another aesthetic ‘problem’. 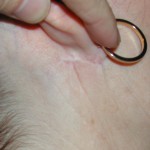 The limited facelift usually starts at the sideburn or tuft of hair in front of the ear where the upper part of the ear attaches to the face. It then runs down inside the ear (behind the tragus in women) and then back out around the earlobe, ending behind the earlobe. Usually a small scar will then extend out behind the earlobe crease, which is necessary to work out some loose skin so that bunching of skin does not stay in this area. The scar is essentially imperceptible because it lies in a natural sin crease where the ear joins the face. The only small area that leaves the skin crease is the ‘hockeystick’ extension behind the earlobe.

Limited facelift scars are….limited…and can be hard to find later. Accepting them is an easy trade-off given the benefits of the procedure.