Reducing the Size of the Lips

In today’s society, large and full lips are highly desirous. This is most evident in the large plethora of lipstick and lip care products as well as being one of the top places on the face for the use of injectable fillers. Despite the trend to go bigger, there are a few patients who actually want their lips to be smaller. Most commonly, these are non-caucasian patients who naturally have very full lips or someone who has a rare congential facial problem which results in large lips, medically known as macrocheilia.

Lip reduction surgery is a fairly simple procedure that can be done under local anesthesia or some form of sedation. It involves a transverse elliptical excision of lip tissue that runs from one corner of the mouth to the other. The key is the location of the excised tissue and the resultant scar. The exposed portion of your lip, the pink portion, is called the vermilion. The vermilion has both a dry and wet surface. The wet portion of the vermilion is the non-exposed part that sits just below the highest point of the dry vermilion (lip line) on the inside of the mouth. Removing excess vermilion here and allowing the lip to roll back and look smaller places the fine line scar in a non-visible location.

Reducing the size of the lips through this inside the mouth approach produces a modest size reduction, never a dramatic one. If one removes too much from the inside, the lips can have an unnatural rolled back appearance. In reality, the best place to reduce the visible size of the lips is by removing vermilion at the front edge where it meets skin. But this would create a visible scar which is why it is not done even though it is more effective at creating lip reduction.

Any form of lip surgery will create considerable swelling in the first few days after surgery. This is normal as the lip swells easily. (just think of when you just bumped it and see how quickly it swells!) As a general rule, the lip swelling subsides at a week out and the lip will look the same then as before surgery. You won’t be able to see visible lip size reduction until several weeks after surgery. So one has to be patient to see the results. Dissolveable stitches are used to close the incision on the lip as this is not a very nice place to have stitches that need to be removed later. 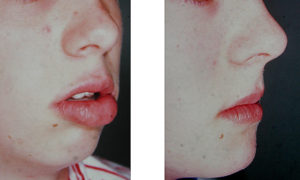 Lip reduction can be done on either the upper or lower lip, or both at the same time. That is a patient’s preference based on their aesthetic concerns. Lip reduction can also be combined with many other aesthetic facial procedures such as chin augmentation.