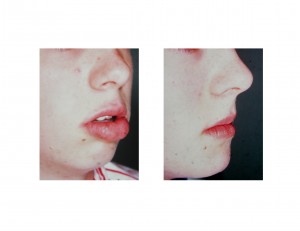 The vast majority of cosmetic lip changes are for enhancement in the desire to get a fuller look. However, there is a small percentagesof people who feel that their lips are too full and prominent. When the lips are excessively large, they may not only interfere with lip competence and function but may also a source of social ridicule and joke making.

Big lips (known medically as macrocheilia) can occur for multiple reasons, many of them from medical conditions. While it is true that large lips are features almost always associated with ethnic races other than that of Caucasians, a surprising number of lip reductions that I have performed in my Indianapolis plastic surgery practice have been in Caucasians.

One of the more unusual excess lip problems is that of the double lip which occurs only in the upper lip. This is not really a function of too large of an upper lip (vermilion) but due to an extra roll of mucosa on the inside. As one smiles and the upper lip elevates, this excess roll of mucosa become evident and is seen as a horizontal roll of tissue beneath the upper lip.

The obvious goals of lip reduction surgery are to achieve a more proportionate size of the upper and lower lips relative to the rest of the face. For many patients,  the large lips are the most dominant feature of the entire face and attract an undesired amount of attention.

Lip reduction surgery is fairly simple and straightforward but the key is in the planning. Initial surgical marks are made at the wet-dry junction but this may change based on which part of the lip is more prominent, the dry vermilion or the wet mucosa. For some large lips, the dry vermilion is the dominant part to remove. For others, it can be more of the wet vermilion and mucosa. Careful rolling back of the lip must be done to make this determination. Wherever the area of excess lip that is to be removed, you never want it to far forward where the final scar may show with the lips in repose. A wedge of excess lip is marked out and tapered as it goes into the corners of the mouth to prevent dogears excesses.

Lip reductions can be done under local anesthesia  if they are only an isolated procedure. Once anesthetized, the wedge excision removes primarily outer mucosa and the underneath submucosa. (in medical macrocheila the lip tissues removed may be deeper and more extensive) It is not necessary to remove muscle for cosmetic reduction and the labial artery should be preserved. I find that a pinch technique is very useful. By this method, the planned amount of mucosal excision is pinched up with a special instrument until the entire desired amount is in the pinch. This is then cut off with scissors and closed with a resorbable running suture. Only antibiotic ointment or vaseline is applied to the dry vermilion after to keep it moisturized as the lips swells and is prone to cracking and soreness.

Expect the lip to swell considerably  (may even look bigger than before surgery) and not to seek the results of surgery for a few weeks. In the end, the lip reduction result will be the exact amount that was removed, usually a 4 to 6mm reduction of actual horizontal lip size.