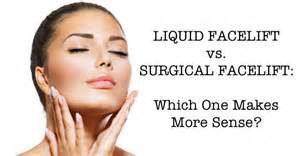 Rejuvenation of the aging face can be done by a variety of treatment strategies. This is no better illustrated than in the differences between the traditional facelift, that has been around for over one hundred years, and the more newly marketed ‘liquid facelift’.

The traditional or truly surgical facelift works by removing excess skin and tightening the underlying layer of tissues in the neck and along the sides of the face. It remains the gold standard in surgical facial rejuvenation because it treats the primary cause of droopy necks and sagging facial tissues. Its effects can be dramatic albeit surgical with all the risks and recovery that goes with the process.

The liquid facelift has emerged as a result of the widespread use of synthetic injectable fillers which explains it as a more recent treatment offering. Adding volume under the skin through a wide variety of filling techniques and materials remains the backbone of how it works. By plumping up the skin from the jawline to the cheek and even up into the brows the skin is pushed outward and to some degree upward. This plumping effect is what creates any amount of a facelifting effect and is done so in a non-surgical fashion as an office procedure without recovery and minimal downtime.

The liquid facelift has evolved into many variations that differ based on each physician’s own protocol. These can include mixing the injectable fillers with fat or platelet-rich plasma. (PRP) Various topical therapies are often done at the same to treat the overlying skin such as Botox injections, laser resurfacing, chemicals peel and microneedling.

The liquid facelift is usually best done on younger patients who have the early signs of aging and often serves a ‘bridge’ until a surgical facelift is needed when one is older or is ready for a more invasive procedure. It is not an advised primary treatment for older patients with significant loose tissue in the neck or on the sides of the face. This is where a traditional facelift is indicated and produces far superior effects and is a better return on one’s investment. Patients that have had a traditional facelift that needs some maintenance treatments, however, may be good candidates for a liquid rejuvenative approach.

Like any form of a facelift, none produce permanent effects. They treat the symptoms of aging but do not cure the fundamental problem. Any facelift that removes tissue and/or resuspends it will have results that persist for years. Liquid facelift have far shorter facial rejuvenative effects often limited to the duration of the injected filler material. (one year or less for many injected fillers)