One of the most common discussed effects associated with chin implants is bone resorption. This has been talked about for decades and patients and doctors talk about it like it is a progressive ongoing phenomenon that has pathologic and negative clinical effects. 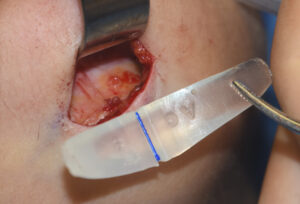 I have stated for a long time that this is an erroneous concept, both biologically and clinically. What is being observed is expected adaptation to the presence of a implant which applies pressure to the existing biologic tissue boundaries. Such pressure is how all implants work (by pushing out the overlying soft tissue) and, as a result, the body will undergo some adaptive changes. Since the implant can not change its physical structure the surrounding tissues do to relieve the induced pressure. This is commonly seen as limited bone resorption which stops as soon as the pressure is relieved. This is a passive adaptation response which is self-limiting and is not what is often perceived as progressive resorption. (progressive bone resorption can occur but only in the presence of chronic infection) This leaves an imprint on the bone which all surgeons have seen and is seen on every 3D CT scan of a chin implant.

In the September 2020 issue of the American Journal of Cosmetic Surgery an article on this topic was published entitled ‘Bone Remodeling Under Screw-Fixed Chin Implants in Patients With Microgenia: A Cross-Sectional Study’. In a study of fifty one (51) microgenia patients (17 with implants = Group A, 34 without implants = Group B) over a 15 year period, cone-beam computed tomography was used to evaluate bone erosion in different areas of the chin.

Bone resorption was higher in group A than in group B (mean ± SD: 0.98 ± 0.63 mm vs 0.03 ± 0.12 mm; P < .0001). Symphyseal buccal cortical bone in group A was thinner (1.66 ± 0.34 mm) than it was in group B (2.07 ± 0.45 mm), P < .001. Group A showed appositional bone growth and no cortical bone perforation. The mean of the amount of bone resorption of chin implant patients compared with that of those without implants was, on average, 0.99 mm greater. Although statistically significant differences in bone resorption were observed between groups, these differences were not clinically significant. Thinning of symphyseal buccal cortical bone without perforation and appositional bone growth occurred in chin implant patients, indicating an adaptive bone remodeling process. They concluded that bone that is in contact with chin implants remodels and remains stable throughout the years, instead of undergoing progressive resorption. 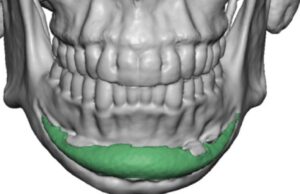 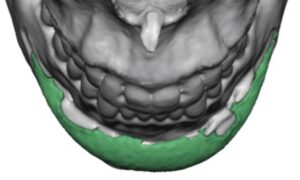 This is the first real clinical study I have read that finally supports the concept of a passive adaptation response of the symphyseal bone to chin implants. This can only be appreciated by the contemporary use of 3D CT scanning. The average implant settling into the bone was in the range of 1.5mms. This is seen on 3D CT scans as an imprint of the implant’s shape/footprint on the bone. This is actually not just seen on the chin but can be seen in other facial implant sites as well. (e.g., cheek implants) As the authors have pointed out this is self-limiting stable process that even undergoes some bone remodeling later. (bone growth around the sides of the implant)