Chin implants are the most common aesthetic facial implant done of which the vast majority are of silicone composition. Silicone is the most commonly used chin implant material around the world because of its lower cost, ease of insertion due to its flexibility and the wide variety of styles and sizes that are available. The one concern or criticism about silicone chin implants is that it exhibits varying degrees of ‘erosion’ underneath it. While often talked about there is actually little scientific study to quantitate its occurrence and whether it is a progressive issue.

In a special Best papers October 2019 Global Open issue of the journal Plastic and Reconstructive Surgery an article was published entitled ‘Bone Resorption after Use of Silicone Chin Implants, Long-term Follow-up Study with Lateral Chin Radiography’. In this study the authors performed intraoral silicone chin implants in fifteen (15) patients in a subperiosteal pocket. A single suture fixation was used. They were followed for at least one year after surgery with a lateral x-ray.

The authors have shown in their patient series that minor bony changes under silicone chin implants is to be expected and is not an ongoing issue. Unfortunately the authors fail to provide an adequate and obvious explanation for these bony changes. They continue to use the term ‘erosion’ which is a biologically incorrect term for this common facial implant phenomenon…which actually occurs anywhere on the face.

Erosion is a term that indicates an active and progressive loss of tissue due to an inflammatory reaction to the implanted material. It is a reaction that does not stop until the offending material is removed. This is clearly not what is occurring as the changes are relatively minor and stop at some point after implantation. This is a phenomenon that is more accurately described as ‘passive adaptation’ or implant settling. 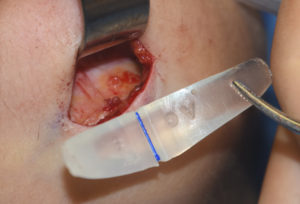 An implant exerts pressure when implanted into tissues for which the tissues were not originally formed to contain it. (concept known as Biologic Boundaries) The body contains the implants as we well know by a capsule but it also relieves the pressure in the tissues caused by the implant…which has violated the natural biologic boundaries. Since the implant can not change its physical form the tissues must adapt around it with varying amounts of tissue loss. Once the pressure of the implant is relieved, this loss of tissue ceases/stabilizes. This is seen all over the body and has been well documented with breast implants. (loss of breast tissue)  But it is appropriately not called erosion. 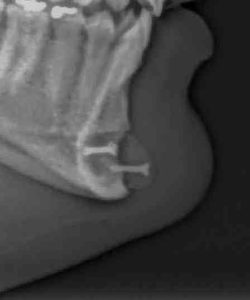 Bony changes under chin implants are normal and are seen in all forms of material compositions not just silicone. I have seen it with every material used from Medpor, PEEK to ePTFE. Tissue ingrowth does not prevent it nor would one expect it to do so.The pressure exerted by an implant is the same regardless of its material composition, its firmness whether screw fixation Is used. And it also occurs anywhere on the facial skeleton from cheek to jaw angle implants. This is best seen when on looks at 3D CT scans that have implants and the implants are then digitally removed.  There is always a ghost image of the implant because there has been a passive adaptive response to it. The only reason that chin implants are continuously cited as being unique in this regard is because of they are the only facial implant that historically can be studied by lateral cephalometric x-rays. But contemporary 3D facial CT allow a better topographic assessment of any facial skeletal area.