Buttock augmentation continues to grow in popularity and is done most frequently by fat injections. (Brazilian butt lift) But not everyone has enough fat to harvest for a successful autologous buttock augmentation and not every fat-injected buttock ends up with the patient’s desired volume. As a result, the use of buttock implants has also grown in numbers by the so called ‘draft effect.’

Unlike fat injections, the use of implants for buttock augmentation offers an assured volume result…but it comes at a price. It is an operation that is associated with all the potential complications that any implant placed in the body can develop. Because of its location and the placement of the incision needed for the surgery (intergluteal incision), it is associated with more potential complications than any other type of body implant in my experience. This is also affected by the choice of the two potential implant locations (subfascial vs intramuscular) which also influences the occurrence of these complications.

As a result, the need for secondary or revisional buttock implant surgery is not rare and is often more challenging than the initial placement operation.

In the June 2018 issue of the journal Plastic and Reconstructive Surgery an article was published entitled ‘Secondary Gluteal Augmentation: Surgical Technique and Outcomes’. In this paper the authors review their experience eighteen (18) secondary buttock implant cases. Their approach was to place the implants deeper in the intramuscular pocket, a capsulotomy/capsulectomy done to the previous pocket, new implants were inserted using a no-touch funnel device and fat grafting was done into the overlying subcutaneous fat layer in some cases. (hybrid gluteal augmentation) 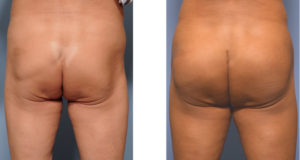 But despite these differences in secondary buttock implant case presentations, the author’s conclusions are sound. The four main principles of 1) management of the capsules, 2) accurate dissection of the gluteus maximus muscle pocket (new or old), 3) application of infection prevention techniques and 4) the use of fat injections around the perimeter of the implants for camouflage are a useful algorithm for the best chance of a successful buttock implant revision surgery.