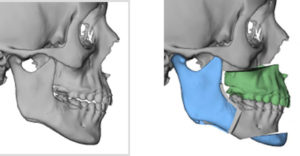 A Lefort I or maxillary advancement osteotomy is one of the most commonly performed orthognathic surgery procedures. By making a bone cut above the roots of the maxillary teeth,  the entire upper jaw bone can be separated from the midface bone above it and moved based on the palatal and mucogingival soft tissue attachments. Such bony movements can be done in a variety of three-dimensional directions.

The most common type of movement done is a LeFort I horizontal advancement. Such bony movements bring the teeth into a better bite relationship with the more anterior lower teeth and do so by changing the shape of existing natural concave shape of the anterior and posterior maxillary buttresses. Beneath the anterior and convex-shaped cheekbones is the concave surface of the maxilla. At these locations and across the maxillary sinus a bony step-off is created when the maxillas brought forward. This usually is not of great aesthetic signficance if the bony movement is not substantial. But in larger maxillary advancements this bony step off may be palpable or have translated into an external midface fullness or puffness.

This increased midfacial fullness is caused by the bone pushing forward the overlying soft tissues of the lower cheek area. This can be seen anywhere from the side of the nose out to the lower anterior cheek area above the mouth corners. Reducing this fullness can be done by a variety of tissue reduction strategies. One of these is to create a more natural concave shape to the buttress areas by maxillary bone contouring. Done through part of the same vestibular incision as the LeFort I osteotomy a burring technique is used. As bone should be removed as possible but the underlying maxillary sinus mucosal lining preserved if exposed.

Such a maxillary contouring effect can be enhanced with cheek augmentation and soft tissue removal procedures (buccal lipectomies, perioral liposuction) if indicated.