The buried penis problem is adult men is almost seen with pubic and abdominal tissue redundancies. Obesity to some degree is a frequent accompaniment to the hidden penis. But even in weight loss patients the tissue redundancies are not completely solved and only the subcutaneous fat layer gets thinner. The skin overhang and loss of penile show remains.

The buried penis poses multiple problems which are completely predictable. The urinary stream is obstructed and this poses obvious hygiene issues. This is compounded by the moist skin folds underneath the tissue excesses.  This creates the potential for irreversible skin change on the shaft such as lichen planus and scarring. Sexual activity is usually limited or impossible to perform due to both physical limitations and embarrassment.

In the November 2015 issue of the journal Plastic and Reconstructive Surgery, an article was published entitled ‘Limited Panniculectomy for Adult Buried Penis Repair’. In this paper, the authors describe a procedure which includes a combination of a mons panniculectomy, fixation of adjacent skin to the base of the penis, removing abnormal penile skin at its base and skin grafting the residual penile shaft defect. 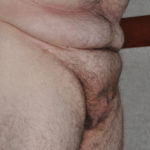 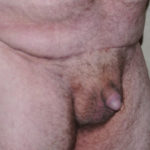 While an overhanging abdominal pannus creates its own contribution to the buried penis, a large mons mound has a more direct influence on it in some men. This is a tissue excess that is situated between the visible waistline superiorly and the penis inferiorly and drapes over it. This leaves only an inverted hole or funnel where the penis is ‘hidden’. While mons liposuction in some male patients may be adequate to create increased penile exposure, a large mons mound with excess skin requires skin removal as well. This is where the mons panniculectomy is useful. This directly removes a large of tissue just above the base of the penis but also allows access to secure the skin around the penis toi be sutured down to the pubic symphysis.

Fortunately addressing poor penile shaft skin is not often needed. But if the penile skin is of poor quality due to chronic irritation or is restricting the penis from coming forward, it need to be released and removed. Skin grafting can be done directly to Dartos fascia which is best to allow the skin graft to stretch during erection. Split-thickness skin grafting is best to allow for quick and complete take in most cases.

The mons panniculectomy and penile release with skin grafting is the most aggressive approach to the treatment of the adult buried penis repair. But in some men with a large pubic mound this may be the only effective approach.