Reduction of the prominent brow bones can be done by two basic techniques and is done for different reasons/patient populations. (e.g., prominent male brow, part of facial feminization surgeries) The type of patient and the degree of brow bossing will determine the best surgical technique. In some cases augmentation of the forehead above the brow bone can also help reduce its appearance, either done alone or in combination with actual brow bone reduction. 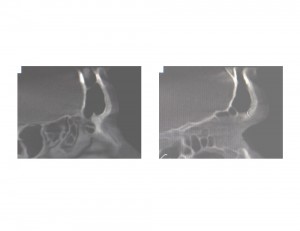 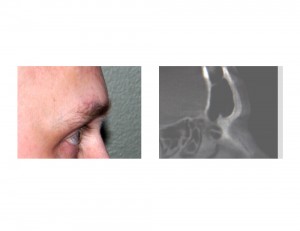 If the anterior wall of the brow bone is thick enough (usually 5mms or greater), a burring technique for reduction can be used. This is the simplest brow bone reduction technique and allows for the best degree of reshaping with a low risk of frontal sinus exposure. It is a technique much more commonly used in women than men because the degree of brow  bone reduction needed is often less. But is some men with adequate bone thickness, burring alone may be adequate for the central and adjoining medial brow areas where men have the greatest protrusions. 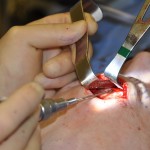 The problem with brow bone reduction in men is usually one of access. While a full coronal scalp or frontal hairline incision is typically used, such incisions in men often poses aesthetic challenges based on their hairline location, density and pattern. One incisional option for a few select men is a horizontal forehead wrinkle. (if they have a fairly prominent one. 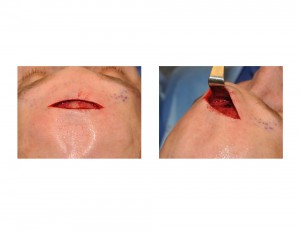 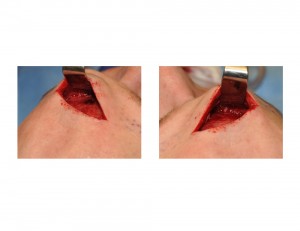 Through a central horizontal forehead wrinkle incision, the brow bones can be easily accessed. One important feature of this forehead incision is not to make it too far lateral to avoid transecting the supraorbital nerves and causing permanent forehead and anterior scalp numbness. This allows a burring reduction technique to be done under direct vision where the exit of the supraorbital nerves can be seen and protected. Reduction can be aggressively done in the glabellar and medial half of the supraorbital rims with relative ease.