What Makes for a Natural Breast Augmentation?

One basic preoperative concept of breast augmentation has taken on a contemporary approach of tissue-based planning. Such an approach strives to achieve a ‘natural breast augmentation’ result by not overwhelming the breast tissues with implants that are more than the tissue can accommodate. By having good tissue support for the implant there is a  lower risk of bottoming out, implant malpositions and reoperation rates. To some degree this fundamentally means that smaller breast implant sizes are used.

Based on a study of natural breast beauty the ICE principle has been described. This is an acronym that stands for Implant dimensions, Capacity of the breast and Excess tissue required. This is a simplified approach for calculating the inframammary fold incision placement and to create a 45:55 ratio between the upper and lower poles of the breast. The key element in this approach is the location of the new inframammary fold.

In the June 2016 issue of the journal Plastic and Reconstructive Surgery, a paper was published entitled ‘Design for Natural Breast Augmentation: The ICE Principle’. The paper described a study of 50 women who had primary breast augmentation using the ICE principle. The study looked at both round and anatomical silicone breast implants using the implant meridian relative to the nipple-areolar complex. For an anatomic implant it is 50:50 compared to a round implant of 45:55. The mean upper pole:lower pole ratio changed form 52:48 before surgery to 45:55 after surgery. Mean nipple angulation improved from 11 degrees to 19 degrees upward. The accuracy of the inframammary incision location was 99%. 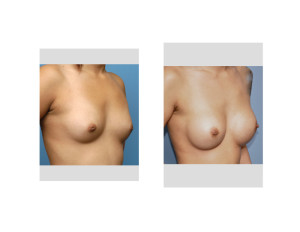 The ICE principle takes into account that in the vast majority of breast augmentations the inframammary fold must be lowered. Much of the work of a breast implant occurs in the lower pole of the breast which must be expanded. If not the upper pole will develop excessive fullness and the position of the implant will cause the breasts to look too high and unnatural. Expansion of the lower breast pole requires extra skin which comes from the abdomen. Knowing where to place the incision in the new inframammary fold location is key. This is not only to avoid a visible incision below the new fold but also to allow a greater amount of the implant to sit below horizontal level of the nipple-areolar complex. Knowing the diameter of the implant allows these measurements to determine the location of the new inframammary fold.

A natural breast augmentation for most women means a breast that has an upper pole that is less full than the lower. Achieving this look does not always require a smaller breast implant to achieve it. The amount of available breast tissue, the natural width of the breast and the elasticity of the tissues may mean a larger breast implant by volume can still allow for a bigger breast augmentation result to still look natural.