Neck Rejuvenation with Liposuction vs. Submentoplasty

A lower facelift, technically a neck-jowl lift, is the standard approach for improving an aging neck or an obtuse cervicomental angle. This has been historically true but as the average age of people seeking neck and jawline improvement continues to lower, some altered approaches are needed. Younger people do not want a ‘facelift’or an extensive procedure but seek something less invasive with a quicker recovery. In the properly selected patient, liposuction of the neck or a submentoplasty may just be what they are looking for. 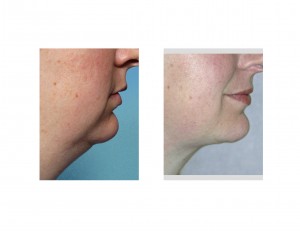 These minimally invasive neck procedures are usually best done for patients in their 30s and 40s, although I occasionally have treated older patients as well with them. The key is the quality and amount of neck skin and how much fat there is. This can be determined by feeling the neck, pinching the neck skin and having the patient swallow. Full necks or those with an obtuse cervicomental angle usually have fat both above and below the platysma muscle. Knowing whether the removal of fat is needed below the muscle is important in determining whether liposuction alone or a submentoplasty is needed. 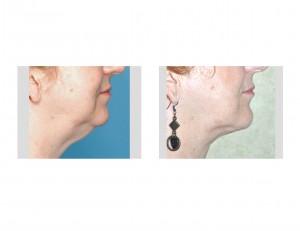 What is the difference between liposuction and submentoplasty? Liposuction is well recognized and exclusively removes fat through a small skin nick under the chin. It can effectively remove supraplatysmal fat in the central neck, jowls and out close to the anterior border of the sternocleidomastoid muscle. A submentoplasty incorporates liposuction but goes further. Through a larger submental ckin crease incision, a skin flap is raised with facelift scissors after liposuction has been initially done. The platysma muscle is then opened down the middle with a ‘cautery clamp’ technique. Subplatysmal fat is then removed and the muscle edges put together with sutures. (others have described their method of submentoplasty, this one is the way I prefer to do it)

Like liposuction, a submentoplasty ultimately shows its degree of improvement by the contraction of the overlying skin. This is why the thickness and elasticity of the neck skin is so critical in determing how successful these procedures will be in improving neck and jawline definition without a lot of irregularities. This is also why the use of neck compression through circumferential garments (facelift bra) is important during the first week after surgery. 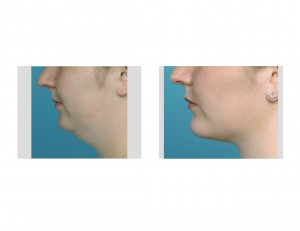 With any neck reshaping procedure, it is important to look at chin projection as well. Many full neck with an obtuse cervicomental angle have a weaker or poorly projecting chin. The use of a chin implant can make a dramatic improvement, in some cases as significant as the improvement in the neck angle. This ‘ying and yang’ approach, bringing the chin forward as the neck comes back, can have a very rejuvenating look to the neck.

While neck liposuction or a submentoplasty do not replace the need for a lower facelift, they can produce significant change in the right patient. Age (less than 50 years old) is one of the best indicators of whom these procedures work best in but not exclusively so.