Necklifts for the Younger Patient

While the face in theory ages evenly, one’s concerns about different facial changes is not. Besides the eyes, the neck is a frequent target of aging dissatisfaction. While the neck is composed of various tissues, one wants see is loose and hanging skin. This makes one yearn for the days when the skin between the chin and neck was firm and taut and a more defined neck angle existed. While styles and fashion have changed over the years, a sharp and clean neckline has always been a youthful image.

While the neck has always been a physical disdain of aging, what has changed is the age at which these concerns arise. Turkey necks and wattles are understandable neck concerns, but they represent older patients often in the sixth, seventh and eighth decades of life.  Ever since Nora Ephron’s book ‘I Hate My Neck’ was published, it was like a light bulb when off for many younger people.  Younger people, women and men alike, now appear in the fourth and fifth decades, to do something about their loosening neck skin. The reality is that the publication of the book was merely coincidental to this interest. The wide spread use of Botox and fillers has filled many a plastic surgeon’s office with early aging patients where the opportunity to discuss these concerns can easily happen.

The interest in addressing the earlier changes in neck aging has led to a variety of surgical and non-surgical treatments. A host of energy-driven devices exist for neck tightening, like Exilis and Ultherapy, but these are really bridging therapies until the time comes when one is ready for a more definitive surgical approach. Some fat shrinkage and skin tightening may work well for more minor neck droops, but really significant and and longer-lasting results requires tightening the muscle and skin to resist the never-ending effects of gravity. 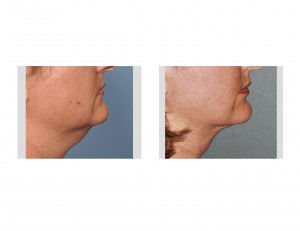 Necklifting options today range from under the chin approaches (submental incisions) that use skin tightening caused by fat removal and/or muscle tightening and more traditional approaches (facelift) that use skin shifting and excision by incisions around the ears. Most younger aging neck patients are going to usually benefit by submental approaches and these are of the greatest interest because they are ‘less’ surgery with a quicker recovery. By definition a submental approach involves a small and inconspicuous incision right under the chin. It can be just a few millimeters when only liposuction is used. The heat created by the use of Smartlipo is a reall complement to the any fat removal done. For someone with a full neck but good thick skin, this could be all that is needed to create a better neck contour. 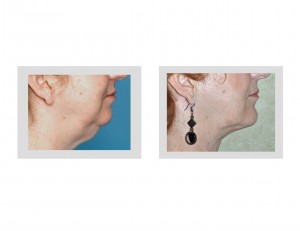 The most unknown necklift is that of the submentoplasty or platysmaplasty. Through a slightly larger submental incision, fat is first removed from under the skin but the cornerstone of the procedure is the muscle tightening. The sagging platysma muscles are sewn either back together or folded onto themselves in an up and down fashion creating an effect like a corset on the waistline. (which is why this procedure is also known as a corset platymaplasty) This shortens the vertical length of the muscle, pulling the neck angle upward  and with that the overlying skin as well. Other muscle innovations create slings from one side of the neck to the other using permanent sutures to create a hammock-like effect with special instrumentation for passing these sutures into the correction position. 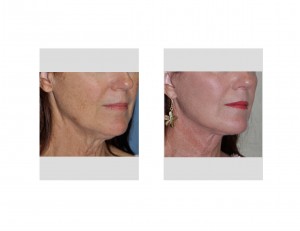 While not as common, a few will have a neck problem that is not primarily fat but just loose skin. Skin laxity is a less frequent cause of younger patients but definitely becomes more of an issue as one crosses the half century mark. Loose skin in the neck, if not too severe, is managed by a smaller neck-jowl tuck-up or one of the many variations of short scar or limited facelifts. While less skin is removed than in a traditional facelift, the tightened on both sides of the jawline creates a hammock-like effect across the midline of the neck pulling it tighter.

The revolution in sagging necks is that more and more younger patients are turning to necklifts as stand alone procedures…changing for some the title of their own book ‘I Love My Neck!’