Of all the commercially available facial implants, one of the most obscure and least commonly used is that of the paranasal implant. Augmenting the base of the nose is historically associated with rhinoplasty surgery in an effort to add overall projection to the base of the nose. It was initially seen as a nose augmentation procedure not necessarily a facial skeletal implant to improve midface projection of the pyriform aperture region

Anatomically the pyriform aperture refers to the anterior nasal aperture. This is a vertically oriented opening in the face with a wider base under the nostrils and a more narrow end superiorly just below a line between the eyes. From a bony standpoint it is bordered by the nasal bones superiorly and on the sides by the maxilla. At its lower end the maxillary bone curves centrally to join in the midline to create the anterior nasal spine prominence. 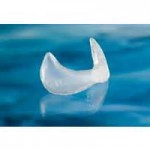 Augmenting the paranasal region is currently done by using the well known peri- pyriform aperture silicone implant. While this design seems logical, its use in my experience has been plagued by too much fullness to the side of the nose creating an unaesthetic and uncomfortable ‘bump’. Patients often interpret this as misplacement/displacement of the implant from its desired location.Its shape does not really permit it to lie very close to the rim of the pyriform aperture and it frequently must be trimmed to do so. While the pyriform aperture area of the midface is not big, its proximity to the sensitive lips and base of the nose does not permit much forgiveness in terms of implant size and location. 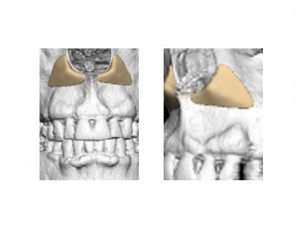 To overcome the problems with current implant shapes, a new paranasal implant design has been developed. It has more of a triangular shape with a more tapered shape at its lateral and inferior edges. This allows its point of maximal projection (5mms) to lie directly under the nostrils and allows it to flow smoothly into the surrounding concave maxillary bone. This avoids any noticeable or palpable bump to the side of the nose and makes it undetectable from the outside. It is surprising the influence that a small amount of projection (5ms) has in just the right location.

The paranasal implant is placed through a small 1 cm incision in the depth of the maxillary vestibule, just medial to a vertical line drawn up from the canine. A short dissection upward locates the lateral aspect of the pyriform aperture just under the base of the nose. Only a small pocket is needed. The paranasal implant is easily inserted and positioned. Because it is a small and tight pocket, no fixation is really needed. (although I almost always use it as I do with just about every facial implant but it can be argued it is not absolutely needed for this implant) A two-layer closure (muscle and mucosa) is done over the implants.

Paranasal implants add projection to the lower central third of the midface. They are used to augment a more flat midface profile with a sunken nasal base. This new design is more anatomically based, adds projection in the right location and can be easily placed without postoperative palpability. Its effectiveness and procedural simplicity should extend facial augmentation benefits to more patients.