While often perceived as a myth, the ears do grow longer with age. But it is not really that the ear is growing, rather the earlobe is sagging. As the only non-cartilage supported structure of the ear, earlobes can and do develop ptosis (sagging) The vertical length of the earlobe does get longer with age and can accelerated by heavy ear ring wear.

Many earlobe reduction techniques have been described over the years. They all can be effective in making the earlobe smaller but their skin excision patterns can create some differences on the earlobe shape as well as place the resultant scars in different locations.

In the Online First edition of the February 2017 issue of Aesthetic Plastic Surgery, a paper was published entitled ‘Earlobe Reduction with Minimally Visible Scars: The Sub-Antitragal Groove Technique’. The authors describe a quadrangular earlobe excision pattern which creates an earlobe flap which can be rotated in the excision defect. This places the scars at the ear-facial junction with a back cutting scar along the antitragis, what they call the sub-antitragal groove and at cheek junction. The resultants scars end up in minimally visible locations. This earlobe technique is shown and talked about being done at the same time as a facelift. 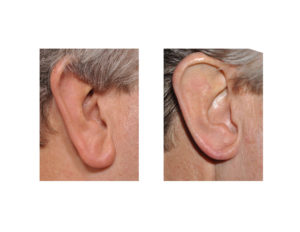 Of the many available earlobe reduction techniques, this one provides a substantial size reduction without distorting the earlobe. (thanks to the antitragal groove backcut which allows for good flap rotation) This is where it differs from just a simple wedge resection along the facial-ear junction. It does not create an inverted v-shape at the earlobe-facil junction which some patient may desire and is achieved with other earlobe reduction methods.