Non-Facelift Options In the Aging Neck

An improved neck shape is a desire for many aging men and women. With time, loose skin and sagging fat develop that create a full neck with a more obtuse angle. When seeing patients who seek a better neck and jawline, they are usually surprised when the concept of a facelift is presented. They may have come in for a ‘necklift’ or some other limited operation but they most certainly didn’t think they needed a facelift.

For some, the issue of a facelift vs a necklift is a matter of misunderstanding terminology. It is common that most people believe that a facelift alters everything from the forehead down to the neck, not just an isolated neck and jawline change. Once explained properly they are ready to proceed with what they called a necklift. But for others a facelift is simply more than they want to do even though it is the ideal procedure for their aging neck and jowls.

Besides a facelift, they are a variety of other smaller or less extensive procedures that can be used to reshape the neck. These include the options of liposuction, submentoplasty, chin implants and the direct necklift. Often putting together two of these procedures is done to optimize their effects. But none of these procedures should be confused with creating the same effect as a facelift in the aging neck and it is important to realize their limitations. 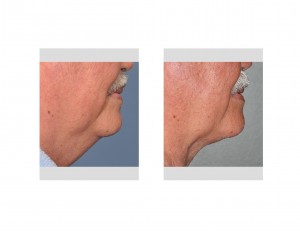 Liposuction of fat can be very effective in reducing neck fullness. But that is dependent on how much fat actually exists in the neck and, most importantly, the quantity of neck skin and its tone. Loose neck skin will not respond to liposuction the way many older patients would like. The neck may indeed get less full but the skin may retract poorly and leave more visible folds and irregularities. Even with liposuction technology such as Smartlipo, which aids the fat removal process by a heating effect, significant loose skin will not be dramatically tightened. While I have seen some surprisingly good results with its use in the older neck, it is not a replacement for an excisional or lifting procedure for loose skin. When using it patients have to be willing to accept these skin issues or be ready to have a facelift later if they want further improvement.

The submentoplasty procedure is another method of neck fat removal but does not rely on liposuction at all. It is the removal of fat from underneath the platysma muscle and is often done as part of a facelift. Through an incision under the chin, the fat is seen through the separated platysma muscles in the midline. When done in a facelift, I use a ‘kelly clamp’ technique to remove the upper portion of the fat pad and then close the muscles over it. For those fuller necks with a lot of subplatysmal fat, a submentoplasty can make a dramatic change in the neck angle in side view. But like liposuction, its success as an isolated procedure depends on how well the skin retracts, which is why it works best in younger patients. In older necks, such fat removal can create skin dimpling and a central neck indentation.

Skin removal in the neck can be done without a traditional facelift. It is not commonly done as one might expect due to the scars that are created. But for the right patient who is fully educated, the scar may be a worthwhile trade-off. The direct necklift uses a vertical removal of skin from the chin down to the lowest horizontal neck skin crease. But skin alone is not just removed. All of the fat underneath this skin and even subplatysmal fat can be removed. The platysma muscle is then sewn together in the most dramatic form of neck muscle tightening due to the visual exposure that the surgeon has. The direct necklift produces the most significant neck angle change, even compared to the traditional facelift. Other types of neck excision or lifts exist, such as a submental tuck or a necklift that uses incisions behind the ears only, but their effects are very limited.

A chin implant is often a surprising suggestion to many older patients when discussing their neck concerns. It is a complementary procedure that increases the prominence of the jaw and by so doing lengthens the upper neck. While not enough alone to change a neck as much as a patient would like, it is a common component of many facelift procedures. It can be used with any of the non-facelift neck procedures and is conveniently done through a submental incision.

While there are a variety of surgical options for neck rejuvenation in older patients, their effects are limited. What they can do should not be confused with that of a facelift (with the exception of a direct necklift) and should be chosen only because one is more interested in less cost and recovery. For the neck with a lot of sag and droop, none of these more limited procedures may be a good option.