Non-invasive body contouring devices have been around for almost a hundred years and, historically, most were more gimmick than effective. But the past decade has seen a new generation of body contouring devices that actually have science behind them and do offer some fat reduction benefits. While all such current devices are different, they are similar is that they create their effects by driving some form of energy to the fat that lies beneath. This energy then breaks up the fat cell wall, allowing its lipid contents to leak out and be absorbed.

One of the more popular energies today is radiofrequency. Everybody knows radiofrequency energy as almost everyone owns or has operated a microwave oven. While it is not the same as cooking a food dish in a microwave, the energy that radiofrequency-based body contouring devices is similar. Just like that food dish that gets hot in the middle but is still cold or uncooked on the outside, so it is with the fat that lies underneath the skin.

Vanquish is a relatively new radiofrequency-based body contouring device that helps destroy fat cells without surgery. Studies have shown that many patients can lose up to two inches around their waist. It’s a noninvasive treatment and requires no downtime. The procedure takes about 30 minutes and requires around four to eight sessions spaced one week apart. 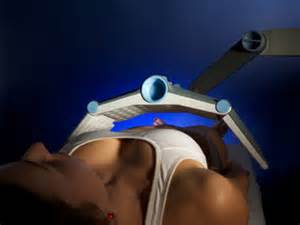 A treatment session is as simple as laying on a comfortable spa bed and an aesthetician places a set of panels over the patient’s abdomen about one inch from the skin. The panels never touch the patient’s skin and does not need to. The device is then turned on and heats up the fat cells under the skin. A warm sensation is felt but never any pain. The depth of the devices’s is about one inch under the skin and is why multiple treatments are needed to work down through the thickness of the fat layer.

While many plastic surgeons are initially skeptical of the device in the beginning, the results quickly win them over. The best patients are those who are mildly overweight with a few problems areas that have not been lost with diet and exercise efforts. Women after menopause that have collected far right around the middle are great candidates as the stubbornness of this type of fat is well known.

Immediately afterwards the treated areas will have some mild redness and swelling but there are no activity restrictions. It is important for the patients afterwards to drink plenty of water and stay hydrated. This helps eliminate the lipids released from the dead fat cells.

The Vanquish device is not a substitute for what liposuction can do…but it can in the right patient prevent it from ever becoming a possibility.