The jawline is the defining feature of the lower face. It is quite simple from a structural standpoint being a u-shaped arc and serving as the transition between the face and the neck. But it can have lots of aesthetic problems that are extremely common complaints. A weak chin, a sagging neck, a double chin, jowls, and weak jaw angles are the main jawline issues that manu people have. Whether one is young or old, male or female, these jawline concerns can affect all due either to aging or a congenital structural defect.

The strong or well-defined jawline has become an important component of facial beauty and attractiveness today. With the advent of the internet and other electronic media, a new cultural standard for jawline aesthetics has emerged. Males contact me today and almost always point to the jawline of Brad Pitt and numerous less well known models as to their goal. Women similarly point to actresses like Angelina Jolie or Reese Witherspoon as their desired jawline look.

What makes up a pleasing jawline that conveys both attractiveness and a more youthful appearance? This always refers to a well-defined  and visible inferior border of the mandible that is straight from the jaw angle to the chin. The jaw angles are slightly higher than the horizontal position of the chin and there is a slight flare from front to back. The chin is more square in men than in a women whose chin is more narrow. Soft tissue that hugs the lower edge of the jaw makes for a well-defined neck angle and the absence of any jowls. It can be seen that the bone structure is the key to a good jawline which will also affect how the soft tissue may sag with age off of the bone.

While I suspect a good jawline has always been a desired facial feature, many recent improvements and advancements in plastic surgery have made it more achievable. But there is not a single jawline technique that will work for everyone. A variety of bone and soft tissue surgical procedures exist and often more than one is needed to get the best result. 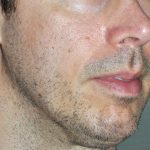 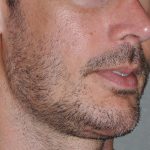 Chin and to a lesser degree jaw angle implants have been around for decades. But new improvements in implant shapes have made them more versatile and adaptable to a variety of jawline problems and are available off of-the-shelf. Chin implants that extend posteriorly to cover the prejowl area and those that have increased width to create a more square chin are but a few of the newer options. Better chin implant designs are still needed, particularly those that may allow for increased vertical as well as horizontal projection. Jaw angle implants have largely been in one style, that of adding more lateral fullness. But newer jaw angle designs allow for vertical height increase and stronger lateral flare as well.

But off-the-shelf chin and jaw angle implants can often not make for a completely straight jawline because they are not connected in the middle between the two over the central body of the mandible. Custom jawline implants can now be made that can create a central jawline augmentation that unites the chin and jaw angle areas. Custom designs may also be used when the size of the chin or jaw angles desired has greater dimensions that what off-the-shelf implants can achieve.

Soft tissue techniques for an enhanced jawline include a variety of well known procedures. Fat removal by liposuction, loose skin tightening and removal through differing facelift techniques, and neck muscle tightening can better redrape the soft tissues around the bony jawline. Two uncommon but useful soft tissue procedures are the submentoplasty and the direct necklift. A submentoplasty works best in the younger patient with a full neck where extensive fat removal and muscle tightening are done without skin removal. In contrast is the direct necklift which is for the much older patient who is willing to accept a neck scar for neck wattle removal and platysmal muscle tightening.

Contemporary jawline aesthetic surgery is more than just a chin implant or a facelift. It needs to consider all anatomical elements and combine a variety of bony and soft tissue manipulations to get the best lower facial improvement.